After crossing the North Orissa coast on Monday, the depression (94b) travelled almost due west this week, and crossing Orissa, M.P. and covering Mah./Gujarat, and south Rajasthan to a greater extent, now lies as a low over Gujarat. The regions of north-west/north India, which are in need of rains now, was skipped ,as the system went along the axis line ,which had shifted southwards during the week. 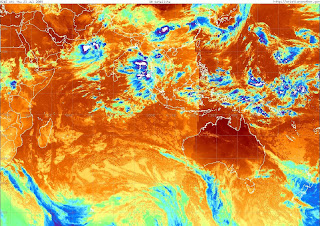 The rain depicting colour image of Thursday morning from NOAA , shows the heavy rainfall area in Gujarat, and as on Thursday morning.
Now, since this system seems to have merged with the Upper Air Circulation of yesterday, and strenghtened a bit to some extent, some heavy rains have been recorded in Gujarat and North Mah. Rainfall figures will be available after Thursday 8.30 a.m., but Dwarka, we know, has got 190 mms of rain till 6.30 on Thursday.
System is expected to move west, and could re emerge in the Arabian Sea.
Now, the swirl seen over North mah. coast, attracted to the low could gradually loose its strengh over this area. As the system moves west, the pull be shifted towards the south Gujarat coast by evening, where there could be heavy rain from today evening.
For Mumbai, much is in store, with a high tide of 5.01 metres expected at 12.48 p.m. today, and agian at 1.30 a.m. on Friday morning
Now, if heavy rains coincide with the unusual high tides, there could be floodings along the nullahs/ sea water drains. Heavy rains, in "lay" terms would mean a very heavy downpour, say lasting at least 15 minutes (which could pour at least 15 mms in that time). Not one, but if a few such showers happen to occur, say between 11.30 - 2.30 on Thursday, it could create flooding problems along the affected areas. But, it also depends, subsequently on how much time the authorities take to clear the floods and drains, as the reverse tide will take a couple of hours to clear the drains.
Only a combination of rains and high tide will have to be observed.
But, with the current weather situation, as mentioned above, it is possible that there will be some heavy showers in Mumbai till afternoon. Rain intensity should lessen after around 1.30 p.m or around that time.