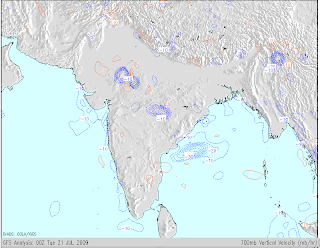 The attached map of Tuesday,from COLA, shows a vortex at the 700 mb level. Now this, looking like an extended cloud formation to the depression, has resulted in heavy rain, more than the depression itself, in Rajasthan. Kota recieved 85 mms during the day on Tuesday.

Not actually forecasted, or maybe the development went unobserved, but an upper air vortex can sometimes appear in the north-west in the form of . W.D,s in this seson also. And normally, an inter-action between a W.D. and a monsoon system, such as this one, usually precipitates the rains in the north-western regions and across the international border.

Of course the depression has resulted in good rainfall in M.P. today (Bhopal 111 mms in 9 hrs), and in Chattisgarh. But, ironically, (maybe due to the other vortex, I am not sure), the coastal and interiors of Maharshtra have remaind practically rain free !

And as expected, clouds have started diminishing from the southern regions. 19th. July forecast for the south holds good.

Now, with the system weakening,already it is a well marked low, and moving north-west, the upper vortex will diminish, and "make way" for the system. With this, the whole of Maharashtra, and coastal areas, and Gujarat should still get rain from tonite for the next 24 hrs. The monsoon axis will remain in its normal position for now, unlike a "break monsoon" position,as suggested by some agencies.
But i feel the expected initial "punch" is missing, and only the precipitation from a weakening system is now possible. A very short lived and fast depleteing system this one, much like the previous one this season.
Mumbai still holds on to the possibility of a clouds 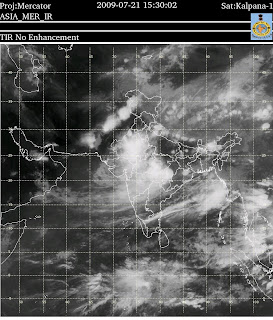 /rains on tuesday night and Wednessday.Maybe around 40-50 mms.

But as the IMD satellite image shows, the rear of the system is clear, hence, looking ahead a bit, Mumbai need not worry of exceptionally heavy downpours on Friday/Saturday. But we shall observe the situation day by day.

For the Gulf region, remants from the system which crossed the Arabian Sea last week , resulted in some persistant isolated showers todaynin the U.A.E. But these arevexpected to clear with no organised cloud formation possible this week. Back to hot weather !
kapadias@gmail.com