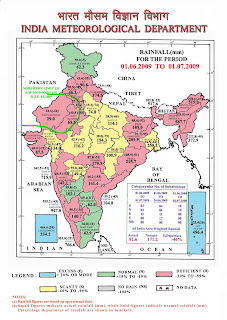 The June rain figures are out, and as expected, the country as a whole is in deficit of -46%. Quite a huge deficit, considering the fact that June is the main month of rain and gets around 25% of the season's amount.
The figures are:Actual: 92.6 mm, Normal: 171.2 mm and Departure: -46%.

thru Thursday. I imagined the city would recieve 20-25mm per day. But, on these 4 days, Mumbai got an average of 10 mm only. Diagram shows the measly rain per day.

Now what? There is some positive and bright news. IMD, and some international forecasting models predict a definite Low in the bay, and the Arabian Sea around the 6th. of July. I feel, if this happens, and in all likelyhood it will, it will boost up rains in most of the deficit regions.
Strong wind flows from the Arabian Sea and the Bay of Bengal are expected to originate with the formation of the low-pressure areas around this date.
The Bay ‘low’ is forecasted to move west over land towards central India and most likely to merge with the system in the Arabian Sea, raining heavily all the way.
Entire central India, north peninsular India, Madhya Maharashtra, west coast,M.P. and Gujarat can recieve good rains along the path.

On Wednesday, the Australian Bureau said " more evidence of a developing El Nino event has emerged, and that computer forecasts show there’s very little chance of the development stalling or reversing.
The Pacific Ocean sea surface is currently significantly warmer than the long-term average across most of the tropical Pacific."

But, I feel, it may not affect our monsoon, not till August end, at least. An interaction of westerlies and easterlies around the Bihar/East U.P. region is precipitating heavy thundershowers. But these are short lived, and not expected to cause much damage.Once the lows from the peninsula seas get "in line", the easterlies will slide south towards central India along with the monsoon trough.
An eastward-bound MJO wave is already impacting the monsoon. It has "livened up" the coastal trough, as seen in the sudden surge of heavy rainfall events over the west coast. Hence hopes of quick revival, that is around the 6th. is more likely now.
By Rajesh at July 03, 2009