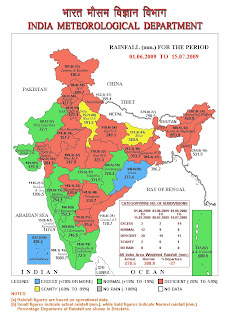 The map provided by IMD for the latest monsoon status, shows a "happy picture" now, compared to last week.
The monsoon was in active phase over central and western India, and central parts recieved 67% above normal rainfall during the last week. And, the "red" areas from the west and south have vanished, replaced by the "normal" blue regions.
Much of the west and south now portrays a better picture and is in an improved situation.
Overall deficit is reduced to -26%. An organised system appearing after a gap of 5 weeks helped improve the situation.

The well marked low pressure which formed over northwest Bay of Bengal during 12-14th July , moved westwards across Orissa thereafter, and now has weakened over M.P. As a result, now, rains will decrease substantially over M.P./Chattisgarh, the interiors of Maharashtra and Gujarat from Friday. Coastal regions will also get reduced rains, as the trough will not attract enough rain bearing clouds to produce persistant heavy rains. The next couple of days, till the 19th, will thus produce reduced rains.
But, all this, not before unloading exceptionally heavy rains in Gujarat on Wednessday/Thursday. Unbelievable rain figures from Gujarat such as Mangrol-61, Veraval-50, Porbandhar, Dahanu-44 each, Maliya-42, Sutarpada-32, Vanthali, Bhanvad-21 each, Umargaon-20, Keshod, Lalpur, Dhoraji-19 each (all in cms), show the extreme intensity of the cloudbursts.

Now, as per several models, a fresh low pressure area is likely to form over the northwest Bay of Bengal around 19th July. (maybe the "pulse" effect of the system seen in the extreme east of the streamline map.
On monitoring this development, we shall be able to guage the next course of rainfall activity.

For Mumbai: Reduced rainfall during Thursday night , maybe a couple of showers. For Friday, again some bright intervals , and showers restricted to localities, may not be widespread across the city. Rain may not exceed 20 mms. for the day. If you are caught in the rain on Friday, take shelter and wait , it will stop !