The much feared upper air "low" has moved eastwards into the Pakistan region, expected to remain there for a couple of days.
With a subdued monsoon phase, the day temperatures in the entire sub-continent region has increased, and most of the Indian region shows an "above normal" tendency. The IMD map shows an above normal deviation of upto 4c, considered quite high for this time of the year.

The map from Cologne Univ. shows the overall distribution of the day temperatures on the 3rd.August. I expect a further rise in day temperatures ( due to factors mentioned below of the "status

Quo" position), and can reach 40c, or above, in Haryan/Rajasthan and Gujarat regions.
Highest maximum temperature on 3rd. was recorded in Dalbandin (Pakistan) at 49c. and 41c in Ganganagar and Hissar in India.


Western part of the axis of monsoon trough runs close to the foot hills of Himalayas and eastern part of the axis passes through Forbesganj, Krishnanagar and thence southeastwards to eastcentral Bay of Bengal., resulting in the `weak phase’ with subdued rainfall, if any at all, for central and peninsular India. Map from NRL indcates the poor distribution of todays rain over the region. 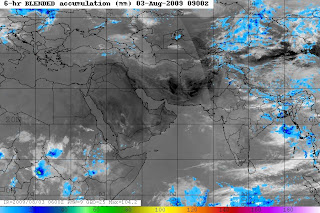 The eastern end of the trough is what is sustaining the ongoing rainfall over east and northeast India.
W.Bengal including Kolkata, and Bihar,should get heavy showers in the next couple of days.

The Bay of Bengal has once again failed the forecasters this year, with an anticipated low-pressure area not materialising on Sunday. The India Meteorological Department (IMD) and the ECMWF had maintained their outlook for the ‘low’ until only two days ago but suddenly withdrew their projection.

On Sunday, the IMD indicated an upper air cyclonic circulation over northwest Bay. This would have had to descend to lower levels to set up the ‘low,’ but that was not to be. Maybe due to the sea temperatures not being high enough, to make the upper air circulation descend at sea level.
At least two global models indicated that the upper air circulation may remain over the northwest Bay for another three to four days.
So, conditions not developing to bring the monsoon axis southwards, the rainfall pattern may yet remain the same and at :status Quo" for another 3 days, till Thursday at least.


Forecast for Mumbai: Partly cloudy/sunny days with a few light rain showers on Tuesday and Wednessday. Days will be at 31c, and with rains only in parts of the city, not much inconvenience, except the humid heat, expected. Daily rain should be around 5-10 mms.
By Rajesh at August 03, 2009

I read your Blog it's a very attractive and awesome post and I found it very helpful for planning my travel in future.if anyone wants to know about golden traingle tour packages and their Varanasi Tour Packages then visit the link below Ghum India Ghum