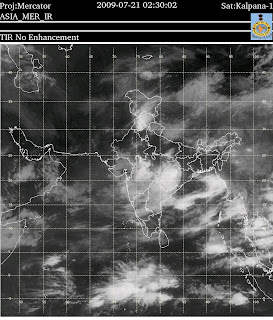 The Deep Depression in the Bay crossed the Orissa /W.Bengal coast on Monday evening, and ,as on late Monday night, was centred at Orissa. The system has weakened from a core pressure of 988 mb. to 992 mb, by late night.
The satellite image (IMD) shows the core region of rainfall around the depression areas.
As the sysytem is supported by strong east/southeasterly upper level winds, it is now expected to move along the monsoon axis line, that is west-northwest, covering the states of Chattisgarh, M.P., Maharashtra, and south Rajasthan.
But it will weaken along its path, as it travels on land.
Resultantly, heavy rains are expected along its path,for the next couple of days, right upto the time it reaches Gujarat, maybe in 2 days.
It may be difficult for the solar eclipse observers in central India, and Maharashtra, to get a view of the event as the sky will be overcast during the event.
Very heavy rains will commence in Vidharbh from Tuesday, and heavy rains in Marathwada later on in the day (Tuesday).
For Mumbai, the day will be overcast, and should expect heavy showers, commencing from around late morning on Tuesday. Showers later in the day will be heavy, and prolonged, and as the system moves towards the west ( as anticipated !), the showers may continue and heavy downpours may persist with regular intervals into the night. Rain upto 60 mms could be expected on Tuesday.
By Rajesh at July 21, 2009

The latest GFS forecast seems to be suggesting strengthning of the low instead of weakning around Wed / thu.

yes,if the system strengthens on land, it will make some difference in the rains in Mumbai.