A low pressure, 92A, has formed over the southeast Arabian Sea, and on Wednesday night was at 12.3N and 68.3E, and core pressure at 1006mb.Winds are at 15kts.
Not much to read into as yet.
Most forecasts show 92A deepening to some extent, and IMD estimates it to become well marked. A deep shear tendency should help the low to become well marked, or maybe a depression.
Again, all forecasting models see the system moving west/northwest, away from the indian coast towards south Oman coastline.This is due to the anchored anticyclone north of Gujarat.
JTWC and Hurricane Zone have not put up any note of this system, not till the time of writing this blog. 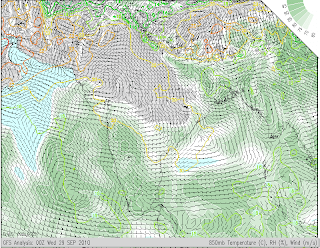 Meanwhile, as mentioned above, the anticyclone is now well engraved in the northern regions of India, and vagaries continues its widhrawal flow.
he map above shows increasingly drying up conditions over these areas dominated by the anti-cyclone circulation expanding to larger areas. 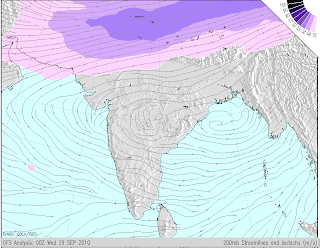 Monsoon has widhrawn from U.P./Bihar/Jharkhand/east M.P.and all of Gujarat except south Gujarat.The 200 hpa winds (above) roughly indicate the monsoon free regions indicated by vagaries. The next 5-days forecast (above) outlooks indicate the humidity and moisture content in the atmosphere would drop in the regions of cenral India, Mah, Gujarat and shifting towards the east.
Likely now of further southward travel of the retreating monsoon. Another 2/3 days and it will be out from M.P./north Mah, including north Konkan and Mumbai and south Gujarat and Saurashtra (vagaries estimate).
And, ECMWF has estimated a low-pressure to form in the Bay off Tamil Nadu coast by October 6. Maybe, NEM advancing ???
It is expected to to cross T.N. coast near Chennai and adjoining South Coastal A. P. by the 7th./8th. Oct.
By Rajesh at September 29, 2010

Will the same behaviour be observed when a low forms in west bay.

Will the clouds rush thru east coast (TN,andhra and orissa coast)

There was an intense area of convection seen just south of Mumbai yesterday night. Infact the cloud top temperature had reached
-70 degree C at quite late in the night around Ratnagiri. Surprised to see this kind of cloud temperatures so late post sun-set (the assumption is that these storms are purely convection led without any active systems).

venkatesh,in the monsoon season, there is normally a strong SW wind blowing, the cross equtorial flow, into the west coast. This brings clouding, more so when a low forms in the bay. this cannot be expected from the east coast, as there is normally no cross flow. That is my opinion, but i am no expert and could be checked.
nt, the clouds seen are due tio convection only. not linked to any low. you may notice that this thick clouding vanishes in the mornings.Height due to convection.

what was with all the rain in mumbai today & not to mention the lightning which went on till 9pm...final rains...??

I was looking at the NOAA data for Mumbai and it shows the current (1:00 pm on 1st October)dew point at 20 Degrees - this is a 4-5 degrees drop from the levels seen recently, also the relative humidity is only 41% down from 70-80%.