As anticipated in Vagaries, the first low (last week's), struck at Utteranchal exactly on Friday/Saturday, raining its might in the state ! With the system merging into the monsoon axis, moisture laden east/west winds became active, or rather overactive,in the region !
In Utteranchal, the rainfall amounts for Friday were: Phoolbagh 116 mms, Mukteswar 102 mms, Bareilly 52 mms, Dehra Dun & Tehri 45 mms each,
and for Saturday, the rainfall figures were very heavy at: Mukteswar 236 mms, Dehra Dun 149 mms, Rani khet and Nainital 120 mms each, mussoorie 90 mms, Tehri 85 mms, Kalpa 74 mms, Poanta Sahib 52 mms. (adjoining H.P.)
For Dehra Dun, the total rain from 1st. June till date is now 2967 mms, i.e. 1087 mms above the normal ! From 1st. Jan it has ra
ined 3080 mms, against an annual normal of 2260 mms !
And rainfall in adjoining West U.P:
Najibabad(Tehsil) 160 mms, Moradabad 120 mms,Deoband 110 mms,Orai 110 mms.
Resultantly, after 2 days of torrential downpours, Widespread reports of landslides and consequent roadblocks hav
e come in, along with reports of extremely heavy rainfall in the state. 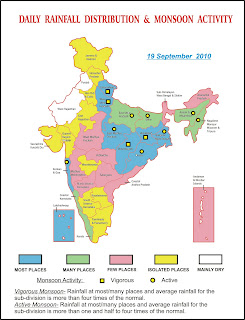 According to one report from a local source, one "complete hillside has been washed away" near Naini Tal.
And, as per the tracking of the current low in Vagaries in the last blog, the system has moved into M.P, and heavy rains have lashed Northern M.P, with figures for Saturday's rainfall at: Gwalior 68 mms, Datia 57 mms, Khajurao 55 mms, Raipur 54 mms, Damoh 45 mms, Pendra 40 mms, Jabalpur & Umaria 39 mms each.
Earlier, while moving across the states of M.P. and Chattisgarh, the rains were copious, and good amounts of precipitation was measured on Friday.
Friday's rain in the region: Durg & Raipur 86 mms each,Sironcha 54 mms, Ahiri 45 mms, Jagdalpur 39 mms, Jabalpur 33 mms, Gwalior 30 mms.
The rainfall activity is concentrated in the regions as per the IMD map of 19th.
It is expected now, the system will fizzle out around the M.P./East Gujarat region, by Monday. This hastening up of its demise is due to stiff resistance in the west from the stabilising anti-cyclone , forming over Pakistan /west Rajasthan. 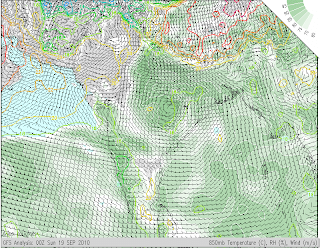 .
As per the current synoptic charts, the 200 hpa jet streams are establishing themselves in the 20N-25N regions, and with strong anti-cyclone situations on the pressure chart, the humidity levels are dropping in the Western Rajasthan and adjoining regions.
Hence, it could be concluded, that the Monsoon has further widhrawn from Central Rajasthan (except the eastern parts of the state), Kutch and entire Pakistan.
By Rajesh at September 19, 2010

is this the last leg of monsoon for mumbai as well???