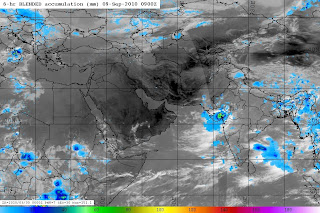 In a day of speedy movement, the hitherto sluggish low, has moved at super speed from M.P.yesterday thru North Mah. and Gujarat today, and now over Gujarat in the evening. The correspnding clouding and rain related to this system has moved thru N,Mah. and Gujarat, today, and shifted location to western Gujarat and adjoining Sindh coast. Today's rain (Thursday) is restricted only to this "catchment" region of the system.(NRL map).
That was fast. Even before I could pre-pone my forecast it has be-littled all estimates and moved away as if being chased out.
Expected to move away west into the sea by tomorrow, (making a bold attempt to forecast this low :), it should precipitate heavy showers along the Kutch and Sindh coast and Karachi.
In the rear of this system, it is expected that having sucked in much moisture, we may expect very little rain in the coming 3/4 day for the entire peninsula region and central regions of india.
The off shore trough along the west coast too is "tired" now, and not expected to be too active next 3/4 days. Albiet we can get just about 5-10 mms/day along
the
coastal cities.
However, the monsoon axis will be along the Rajasthan-Delhi-NorthM.P.-Jharkhand belt, and these regions would get some rain (not heavy).
"Widhrawal Symptoms":
In the next 2 days we see the monsoon anchor, the Sindh low, becoming 1000/1002 mb. This is normally at 994 mb in

full season, and has been at 998 mb since last week. IMD/GFS map.
We also see in some international models, the 200 hpa jet streams slipping a little below the 30N line, and becoming westerlies in Pakistan from the 11th./12th.
Initial signs of monsoon
moving out from the extreme west and Sindh region would be from early
next week. Say, after the current system,low, has finished its job in coastal Sindh.
Mumbai Forecast:
Friday:

31c - 26c: More sunny than cloudy. light rain in some areas.
P.S.: This pertains to the clarification posting on vagaries dated 31st.August.
Vagaries had made a clarification in response to a reader's query about the lakes position.
Our reader had mentioned that TV9 channel had showed Bhatsa overflowing. It was clarified by this blog that the 2 lakes, Bhatsa and Upper Vaitarna have not overflowed, but water was released from the lake as a pre-cautionary measure.
Dear Reader, the same matter has appeared in tday's Times of India on page 4 under the heading "Bhatsa level lowered on fears of overflowing".
Unbelievable !
By Rajesh at September 09, 2010

Hi , I would like to see in your blog analysis and comments on this monsoon season(after it ends)which for me has been peculiar If not unsual, for this season had no Bay depressions , we saw multiple lows tracking through North Andhra coast and wheeling through Saurastra. Traditional arid areas in excess, eastern part relatively dry . Would love to read your analysis and comments on these aspects. Thank you so much for your wonderful blog .

Hi, what are the current levels of lakes that supply water to Mumbai?