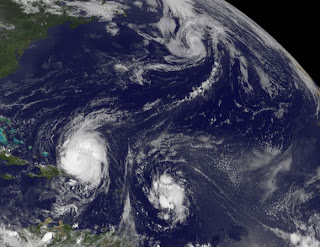 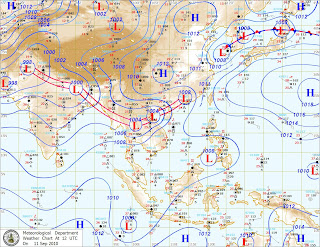 Very heavy rains in North Rajasthan and Haryana/Punjab today.
Reason ? Here is the Thai map with the explanation. The monsoon axis, shifts North, and the western end, a low at 998 mb sucks in and draws in all the moisture from the erstwhile system in the North Arabian Sea.The satellite image shows the clouds in that direction.
And rainfall along the axis, as always.(also seen in satellite image). 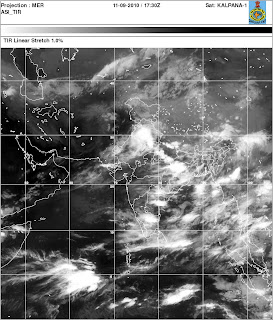 For west Rajasthan, I feel this could be the final bout of rains this monsoon.
I do not expect the moisture in these Northern regions to last beyond a day, with heavy rains in Delhi on Sunday.
But due to the monsoon axis being a bit North, some rains along the Delhi/U.P./Jh
arkhand belt c
ould continue till Monday.
From Tuesday, we can expect the axis to shift southwards along the South Rajasthan/M.P./Orissa line.
Weak rainfall will continue alng the west coast.
The states of Gujarat, M.P, interior Mah, interior Karnataka, A.P, and T.N. will have very
scaterred rains till Wednesday, 15th.
A request to re-read yesterday's blog on th forthcoming estimated low....
I expect a Bay low off the A.P. coast around the 15th. As of now, since the axis could fall in line of the low, the system should track into M.P.from the 17th.
More of this next week.
Mumbai Forecast:

Tuesday: 32c - 26c. Some thick clouding in the morning, getting brighter later. Rainfall will be around 5 mms.
By Rajesh at September 11, 2010

rajesh, what is the monsoo axis and where exactly is it located. Is it the trough over much of india & pakistan on the thai map?

Would appreciate if you could explain this. Thanks. tyrone.

sorry tyrone for the late reply.
Very very briefly, monsoon axis is an extension of the ITCZ. The winds to the north are east, and to the south of the axis the winds direction is west.the axis is the convergence of these winds. And its a "corridor" for systems.
My views, though I'm no expert on this.