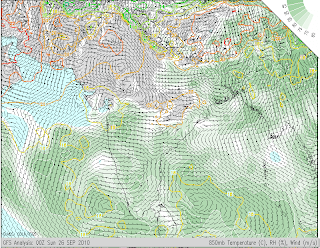 With the anticyclone now well anchored over North-West India, the SWM is widhrawn from the region.
Northwesterly winds towards the north Rajasthan and are also prevailing over most parts of north India. This is indicative of sunny and drier days as moisture is wiped out by the arid northwesterly winds in the region
Vagaries would specify Gujarat (except South Gujarat),Rajasthan, Punjab, Haryana,J&K, H.P.and North M.P. as Monsoon free from today, 26th September.
Would expect the widhrawal to cover Utteranchal, west U.P, M.P. and Chattisgarh in the next 2/3 days.
Interior Mah has been receving thundershowers in the last 2 days. Pune and Aurangabad have been big beneficiaries . Today, Sunday, Pune got a decent thunderstorm in the afternoon.Thunder cells rolled over Mumbai on Sunday evening, with just some drizzles in some areas.
The forecasted vortex formation for this weekend is seen with heavy rainfall in South Konkan and Goa.
South Gujarat, Mah. and Karnataka would see some thundershowers in this week.
By Rajesh at September 26, 2010

Looks like Mumbai might still get a drenching overnight, there appears to be a lot of lightning activity S and SE of Mumbai still even at 11:30 pm perhaps due to the vortex you mention.

Uptill what date can Mumbai see less and less of these thunder clouds? When can we moth ball our umbrellas?

From the GFS data of today morning it looks like reduction in rains around the Mumbai area from 1st October onwards with a drastic reduction around Sunday - 3rd.

However, today is very hot and humid (was out for few hours in the morning and was quite bad outside) and looks like there will be a moderately heavy thundershower in the city by evening

lot of thunder & lightning in deonar region...started at about 5pm..at the beginning,there was a lot of wind..kind of a like a storm...

Most of the rain and storms have been along the west coast right from Trivandrum to Mumbai along with Tamil Nadu. Rest of the country is very rain free.

This has been the pattern for the last one week now with the rain hugging the west coast. Even with this year's active Monsoon, the west coast has got more then it's fair share of rains and they don't seem to be going anywhere very soon!!

Thats right..there was very heavy rains reported today evening from Navi Mumbai,Airoli,and that area. some showers were also measured in Chembur and Deonar. Dadar and Worli recorded some rain in the evening..and lightning was seen all over Mumbai.
Its not only on the west coast,like i mentioned in my blog, rains were heavy in Pune last 3 days and Aurangabad, Jalna and some places in Marathwada.

Elephantas ... are common during retreat of the monsoons