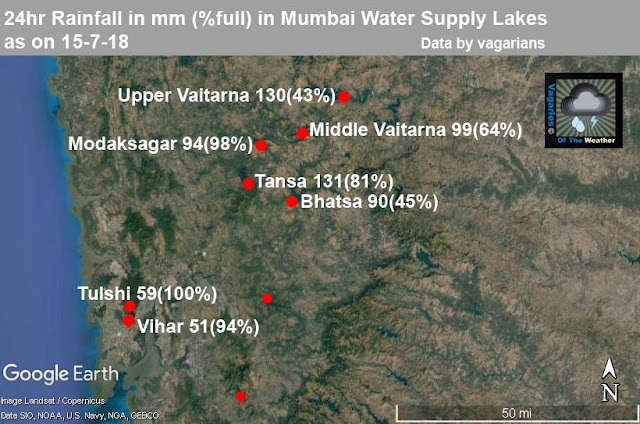 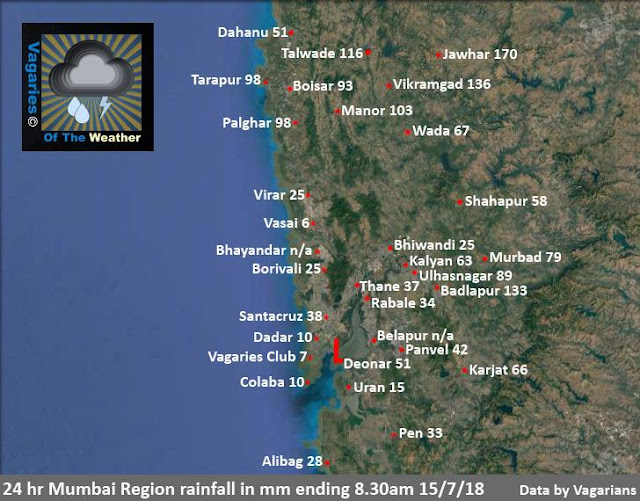 As posted on 9th , The Low pressure has formed in the North West Bay. It has been long since we saw a system from the Bay, only numbered BB-4 .
This has kept the Monsoon trough in its normal position.
As Vagaries had mentioned in the 10th post,  Being active along the trough, Delhi region got very good rains on Friday. From 8.30 am- 5.30 pm, The Ridge saw 118 mms, Ayanagar 71 mms, Lodhi Road 44 mms, Gurgaon 39 mms.S'Jung  5 cms.
Rains reducing after Saturday, to increase again next Wednesday.

Mumbai:
After a few showers on Friday, we see a gradual increase in rainfall from Saturday. Frequent showers on Saturday increasing to frequent showers with increased rainfall on Sunday and Monday.With rainfall likely around 100 mms or more in some Northern suburbs, Local flooding possible on Sunday/Monday.
More rains likely in Northern outer townships and ghats.

What is going to cause the increase in rains in and around Mumbai? The Low Pressure?

The Low will be well marked and track W/NW towards M.P. and Gujarat. The track will generally be along the axis.
The Mumbai rains should increase due to this BB-4 system and the activation of the off shore trough plus the pull effect due to BB-4.

Sir
Will the low be helpful in pulling the rains in interior Maharashtra ?
Especially marathawada and eastern part of Madhya Maharashtra ?

Sir any chances for sindh from this BB4?

BB4 may not remain till Sindh. Light rains and drizzles in KHI and coast from Monday for 2/3 days.

We can say some early rains on Monday and Tuesday in Marathwada...around 20 mms. Pune sees some 15-20 mms on Monday/Tuesday.

Better showers in intensity early next week in Vidharbha (including Akola).Akola gets good showers Mon/Tues/Wed.

Konkan seems to get attacked with AS trough + AS UAC + Bay low (almost twice a week!)

modak sagar on verge of overflowing

Difference between trough and UAC...
A trough is an elongated (extended) region of relatively low atmospheric pressure, often associated with front
The upper circulation in India is jet streams. Upper air circulation in this region is dominated by a westerly flow. An important component of this flow is the jet streams. Jet streams are located approximately over 27-30 north latitude, therefore they are known as subtropical westerly jet streams.(500 hpa ?)

I am still curious- we see many UACs in IMD weather report - but why does UAC over Maharashtra and GUJ gives continuous torrential 3 digit rains but not in other places? Mumbai no sun since june only rain cold windy ....

If someone says Oct to Dec Pamban receives 1500 mm and here Navi Mumbai on 0 in same period so how other will react with laughing same case is here can't do anything to rubbish comments . at least Rajesh sir not blocking here so his repetitive irritating comments are continuing from years and years.

And you read Kea blog regularly as heavy weights rainfall figures from PJ post, you discuss it here. So if you have guts whatever repetitive comparison you post here do same post on Kea blog also then !! Kea blog mainly caters TN weather and your concern on SE India will be more nicely answer their. So whats stopping you from commenting their in Kea blog ?? Why irritating rest blog readers here with non sense comparison !!

Rajeshbhai, what is the forecast for Mumbai for the coming week?

Bhatsa is filled 58 percent not 45

Sir what's the forecast for Mumbai region for next week