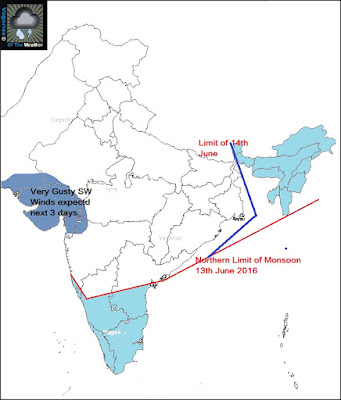 An off shore trough has formed along the East Coast of India. An embedded UAC is likely off the North A.P./Odisha Coast by the 17th. We shall observe the perseverance and strength of the trough next 1 or 2 days before tracking the UAC.

As the Monsoon advances into Northern regions of Bengal anfd Sikkim, the East winds there and the SW winds in South Bengal form a weak Line of wind Discontinuity. This is causing violent thunder storms in the Jharkhand and South Bengal regions, including Kolkata. 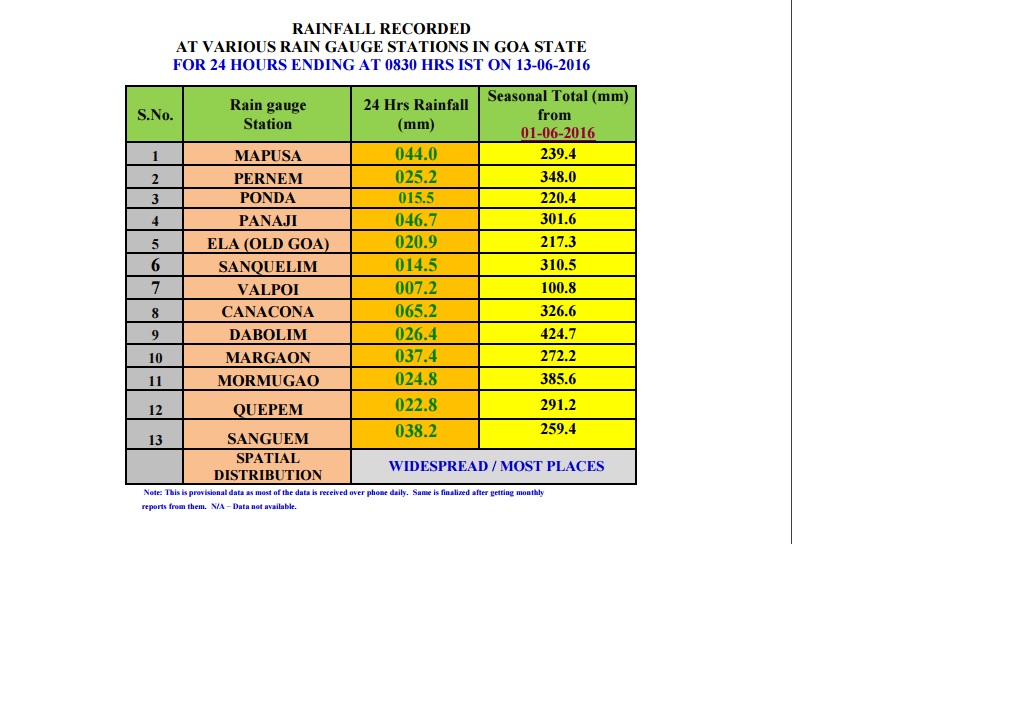 Vagarian Abhijit Modak from Badlapur pointed out the increasing and good rains in Ratnagiri (South Konkan) also, and it continues even on 13th. Ratnagiri has totalled 226  mms as on 13th morning , and add another heavy 101 mms on Monday in the day (till 5.30 pm IST), adding the Season's total to 327 mms.
As the rains in Ratnagiri and other South Konkan stations continue till date, Harnai totalling 212 mms. We cannot ignore such heavy rains and good totals...
I checked up on the Off Shore Trough scene and a slightly weak upper wind penetrating into South Konkan.
Due to the "spurt" in the feeble trough in the Goa/ South Konkan small regional area, there was a spurt of rainfall, enough to push the Monsoon current a short distance North.

With these, vagaries advances the South West Monsoon into South Konkan upto Harnai. 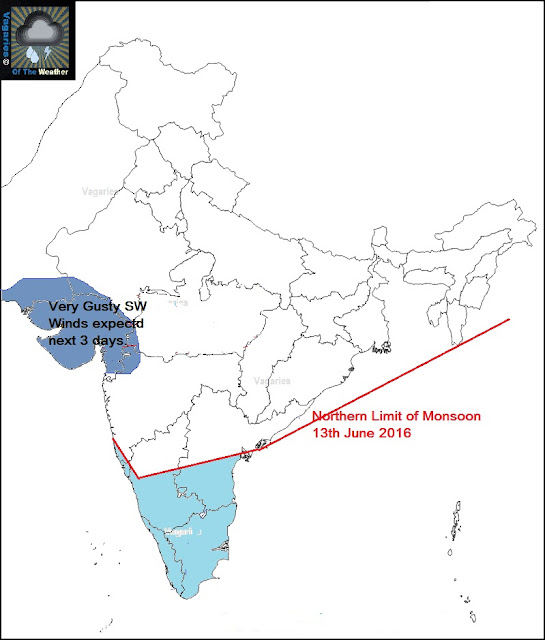 This will not change or affect the situation explained in yesterday, Sunday, post. The advance now remains halted as explained, and all dates mentioned in Sunday 12th post for Monsoon remain same.
The seasonal Low trough remains around 996 mb, and the "High" anti cyclone is forming in the 700 hpa level. So, another 4 days wait for the Peninsula advance is expected.

SWM is advancing into the NE States and Sikkim within next 2 days.

Mumbai: Day warming up. Next 3 days will be partly cloudy with passing showers in parts of City, daily rainfall not exceeding 7-10 mms. Monsoon cannot set in before 17th June.
Cloudy weather for North Konkan (Pen, Roha, Panvel), with passing showers for the next 3/4 days.
Pune will be partly cloudy with light rains in some parts. Proper Monsoon not reaching before 18th June.

Surat: Nothing except hot sultry weather for Surat thru the week. A stray shower from passing clouds. Strong winds from SW direction expected next 3 days.
By Rajesh at June 13, 2016

Had reported about gusty weather in bhuj 2 days back
Could you please explain what us causing this ?

Rajesh Sir from the satellite image I can see that there is no cloud formation at Arabian Sea branch...which is not looking good to me as compare with last few days ...also when can we aspect proper monsoon shower like 100 mm for mumbai region.

Yet another thundersquall lasing Calcutta right now. Its very unusual for a nor wester to lash city at this time of the year. Please shed some light on this unusual happenings.

any chance of further advancement west of sikkim in the coming few days ?

Thanks rajesh sir for giving the forecast for Surat city

Sir very gusty SW wind is blowing here in Hyderabad Sindh as you mentioned and this type of wind is very common in May,June and July,my question is that what is the reason behind it and why this type of wind is only blow coastle areas of Sindh and Gujarat why not it is in other areas of Indian west coast and BOB coastle areas and my second question is that PMD and some other weather sites predicting above normel rains in Sindh but no any atmospheric sign is yet here which can follow these predictions so what is your prediction for Sindh.Thanks

the monsoon seem to be picking up from 17th onwards.....

Karan/Kamran: The strong winds in parts of Sindh and Gujarat are the resut of close isobars near the core of the seasonal Low. Close isobars of different pressures, graded in difference of 2 mb near Sindh Gujarat, cause strong winds. The distance between pressure isobars increase near the west coast of india, so there cannot be strong winds due to this reason.

Early to give predictions, but previously i have mentioned of normal rains in sindh this year.

Neeraj: The Monsoon will advance into Western Nepal in next 3 days. We see the eastern bay branch picking up in the next few days.

Sarfarajkhan: As yet, we cannot say, but like i mentioned in this post on Tuesday, if we see a pick up of the UAC which may form on 17th, we can get heavy rains in Mumbai by Sunday. But I will not give the official forecast today.

wasim: Kolkata getting strong nor westers last 2 mornings due to an activating north Baydue to northern end of off shore trough. Also, due to advancing monsoon in the Northern region of West Bengal and sikkim, the east winds there and SW winds in South Bengal are forming a sort of Line of wind discontinuity.

Badlapur received first heavy showers of the season for 20mins at 8.30pm today.

Rajesh sir,will it rain heavily in north konkan and mumbai from sunday?How many days the rain would last?what will be the amount?please reply.