Vagaries Views on Advance of Monsoon and next 2 days Advance Estimate: 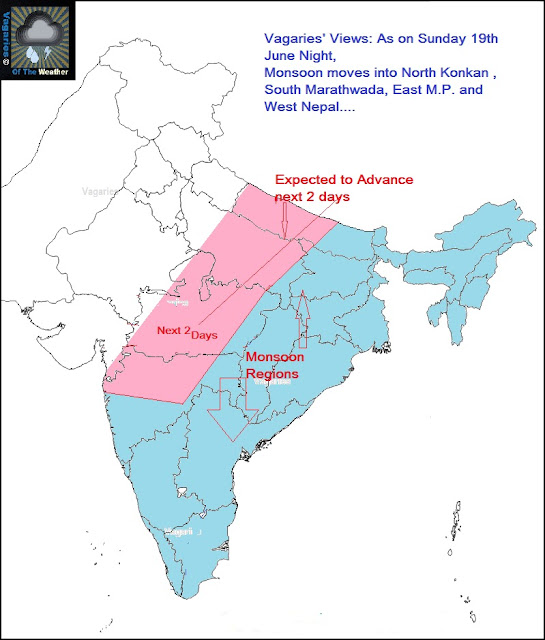 The UAC moved towards Vidharbh/Telengana and then towards M.P. before dissipating. This dragged the South West Monsoon into Vidharbha. The west coast trough showed some strength on Saturday and Sunday, bringing in good rains to Madhya Maharashtra (South) and North Konkan.
Monsoon also advanced upto Dahanu.

The moving system also brought some rains in Eastern areas of Gujarat.

Monsoon into Mumbai: Mumbai received some sharp showers on Sunday evening. By 8.30 pm IST, Colaba had measured 22 mms and Scruz 26 mms. Vagaries recorded 35 mms.
So, by Monday morning Mumbai may get the estimated 35-40 mms forecasted.
Monday and Tuesday will be cloudy, with some showers. Rainfall amount will be around 25-30 mms /day.

Good rains expected in North Marathwada (Aurangabad) and Nasik regions next 2 days.
Showers in West M.P. and reducing rains in Eastern region of M.P.
Increased rainfall in Kathmandu and Western Nepal from Monday for 3 days.

Sir, what about Valsad and south Gujarat?

Any heavy rain forecast for Pune?

Rajesh sir- even though El Niño has ended why are we not seeing the low pressure areas in BOB??

Thanks a lot sir. SWM made Very soft and silent entry to mumbai :-)

Rajesh sir,with this pace ,do you think Mumbai will be able to cross its monthly average (june) of 523mm?Will north konkan and mumbai get heavy rains with merely 10days remaining for june's end?you forecasted excess of 10%in jun-jul.please tell when would our region get bounty rains in next 10 days.please answer.

Sir, Nothing significant here in pune till now. Few drizzles. When can pune expect good rains? Can you please share your views on next UAC which may get developed in few days. Will it have good impact on pune and ghat sections? Ghats sections are also not yet in their usual behaviour yet.

Hoping that it rains heavy in north konkan as well in coming days.

Recent observations and climate model forecasts continue to suggest La Niña may develop in the coming months, hence the Bureau’s ENSO Outlook remains at La Niña WATCH. This means there is a 50% likelihood of La Niña developing during the second half of 2016. If La Niña does develop, climate models suggest it is unlikely to reach levels seen in the most recent event of 2010–12, which was one of the strongest La Niña events on record.

La Niña is typically associated with higher than usual winter and spring rainfall over northern, central and eastern Australia, and cooler than normal daytime temperatures south of the tropics.

Warm ocean temperatures to the northwest of Australia can be associated with a negative Indian Ocean Dipole (IOD), especially when they occur at the same time as cooler than usual ocean in the tropical western Indian Ocean, near the African coast. Climate models and current observations suggest a negative IOD may be in the early stages of development. However several more weeks of similar ocean temperature patterns would need to be observed before 2016 is considered a negative IOD year. Negative IOD events typically bring higher than usual winter and spring rainfall to southern Australia.

Both JAMSTEC and Australian Agency have forecasted negative IOD , which in turns means a drier monsoon for the western coast .

Rajesh Sir, Based on your experience , how much important is IOD for monsoon for Konkan and western maharastra, are the signs bad from an overall monsoon picture ?