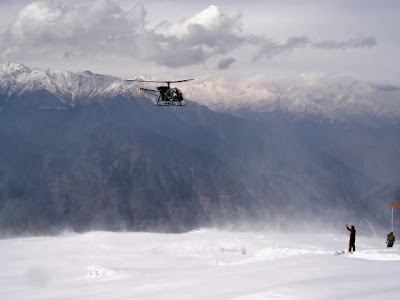 At minus 19.8 degrees, Kargil town was the coldest in Jammu and Kashmir

Haryana got some respite from the cold weather as most places in the state saw rise in minimum temperature by 2-3 °C. Hisar recorded the lowest temperature in the state at 3.4 °C. The city got respite from the freezing weather. Similarly Narnaul which saw freezing temperatures past few days also shown an increasing trend with minimum settling at 3.5 °C. Bhiwani at 6 °C. Kurukshetra at a low of 6.2 °C. Rohtak at 6.9 °C & Ambala at 7.5 °C.

In Rajasthan, Sriganganagar turned out to be the coldest place(Plains) at a minimum of 1.7 °C. Churu recorded minimum of 4.1 °C today. The city got respite from the severe cold weather when temperature dropped to -2.7 °C on 3rd January(Friday). Also FATEHPUR in Shekhawati region on 3rd January dropped to -4.2 °C. It remained the coldest place in the state that day. The water in the pipelines froze during the early morning hours in both the cities. Mount Abu, in the hills, today recorded a low of 0 °C. Bikaner at 5.7 °C, Jaisalmer and Jodhpur at 6.2°C  & 6.4 °C. The state capital, Jaipur recorded a low of 9 °C, a notch above average. Other towns in the state such as Barmer, Udaipur & Ajmer recorded a low of 7.6 °C, 7.8 °C & 8.8 °C respectively. Kota received 4.8 mm of rain till today morning with minimum settling at 15.6 °C, five notches above average. The city is getting good rainfall from the past few days.

Kathmandu, Nepal bone dry for quite some time now - last rainfall was on 18th Oct ; what's the prospect of rain in the coming days ? All the WD's till now have been ineffective.