Posted on Tuesday (28th Jan) Night:Vagaries Long term and meteorological Estimate for next 10 days:(could vary by a day on either side).

1. For the North, a Western Disturbance, F-1 is approaching Pakistan. Current core in the STWJ is over Patiala (normal), and registered a max wind speed of 149 kts..In the first week of February, Trough and a deep loop in the 200 hp jet streams show an effective system for Pakistan. Approximate date of commencement of precipitation in Pakistan would be 1st February. Regions most affected would be extreme North and Central Pakistan, but southern regions (Karachi and Sindh) are also in for some rains.
Into India thru the Rajasthan route on the 2nd of Feb...initially effecting Kashmir and HP. Rains in Punjab, Haryana and Delhi, Southwards upto Rajasthan and Northern MP.on 3rd and 4th Feb.

2. Around the 7th of Feb, another northern latitude WD, F-2 comes along in the Northern Hill  States of the sub continent. Would precipitate in Extreme Northern Pakistan, Kashmir and HP and Utterakhand.

3. Early indications show F-3 to be effective and strong and could cover Pakistan completely on the 10th, and move into India on the 10th. covering the region North of Rajasthan (including Rajasthan).

First half of February could be very wet for Kashmir and HP, and would need precautionary steps from extreme snowfall.

F-1 and F-2 will effect Western Nepal, but F-3 will precipitate all over Nepal.

Temperatures would rise in North India prior to F-1. Cold conditions after the moving away of F-1 in Northern, Central and Western India. Cold in Sindh (Pakistan) after F-1 moves away.
Details on this page of vagaries as the WDs approach... 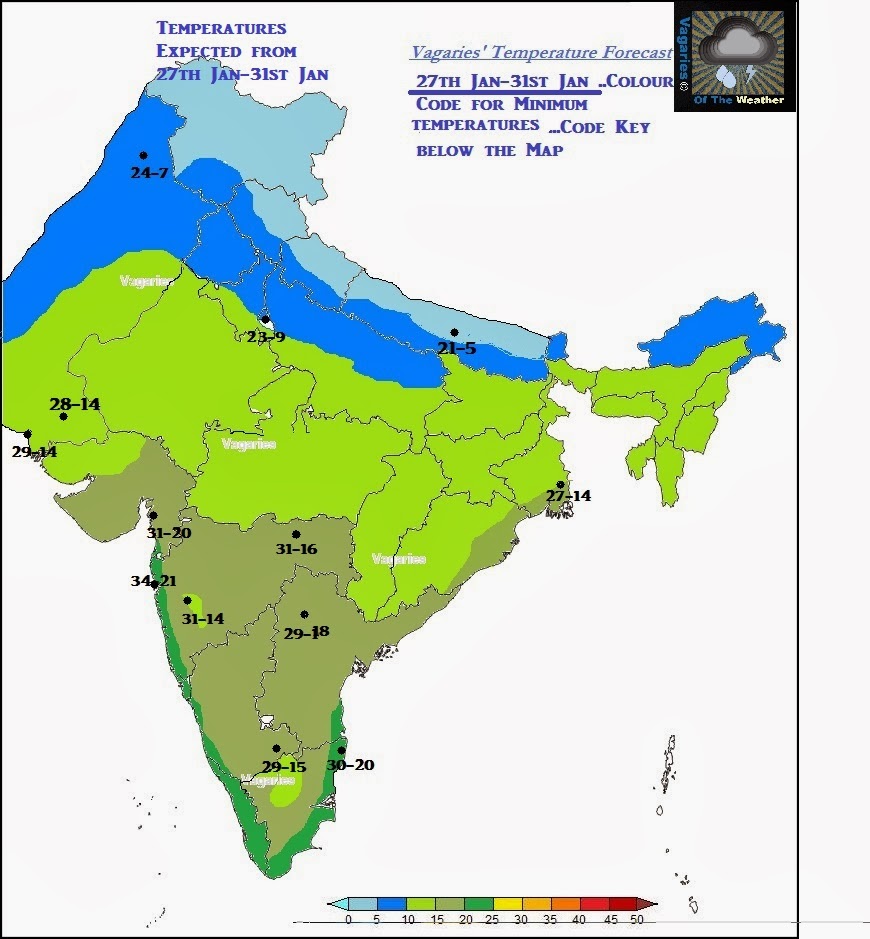 An Anti-Cyclone sits over the Central region of the Sub-Continent at the Upper Level.
Dry Weather over the Sub Continent till this Month End..

Sir,New Delhi is recording above normal temp. even on clear day . Any reason .

Kathmandu : Last few days, the temperature has risen by few degrees.The days are quite warm and sunny, with pleasant evenings and cold mornings.Normally, this kind of rise is not expected till 15th of Feb, but end of January was similarly warm last year too, though middle of January last year was bitterly cold with low in the morning dipping below 0 consistently for five straight days. This year, the lowest minimum recorded has been +0.5, no negative minimum recorded yet.

So Konkan region is almost under heat wave grip as both min & max temp are above normal by 3 to 6c !!

Anoop: Your question not clear..

Abhijit: "All Maharashtra coastal cities will be around 34/35c, however, the interior Mah cities will continue to be around 28/29c in the day, as strong E winds continue."

Some readers have asked as to why the minimm temperatures are on the higher side in North India in spite of clear skies...well, we do find the min temps almost along the normal levels in the cities of the Plains. Jaipur and Delhi are almost on normal levels. But, cities in Punjab and plains of Jammu are above normal.
Basically, a WD is a cold front. Cold air in a front pushes along and lifts the relatively warmer air and seeps below the lighter warm air, and this whole system moves eastwards. So, in its rear, a WD leaves very cold air on the ground.
In the current case, fog and the moisture has trapped the air, and even fresh air flowing in attunes to a higher temperature, instead of loosing heat through clear sky radiation.

I am waiting for F3 then.

For how long is the eastern winds expected to dominate in Mumbai?Resulting in a gap of 12 degrees between min and max.

Min(low)humidity for today of west coast:

Ron: It seems the Easterlies will change direction after the 1st, or around the time the Wd (F-1) advances...

Thanks for the report Neeraj...wish you good rains..

there are some reports on an El Nino forming? how credible are these? and what is does it mean for the monsoon in 2014?

Hi Rajesh,
Could you give details on the precipitation levels that the western disturbances will bring to the Kumaon region? I am mainly interested in the snow forecast in pithoragarh district's higher reaches and hope the precipitation is in the form of snow.

What would be the weather for Patan ( North Gujarat) for Next 10 days.
I am here for next 10 days for a family function.

viveck o: Yes, there are some models showing an El-Nino. I shall be writing on the El-Nino effect on SWM (if any) on Sunday..shall publish by Sunday evening..

Prashant: Kumaon higher reaches (>8000 ft) will get snow fall, maybe around 15-20 cms, but depends a lot on the exact location..snow will be rare, but rains sure below 7000 feet..This will be on the 3rd of Feb

vinod: Patan will be sunny, and warm in the day with pleasant nights at 14c. After the 3rd of feb, we see North winds blowing, and temperatures getting colder, to around 11c.