Bangalore (Urban) is doing well this year. Having actually received (till 12th September) 344 mms against a normal of 255 mms (+35%). And Bangalore (Rural) actually got 409 mms against 328 mms, excess of 25%. Best performer is Mandya District, showing 55% excess.
Bangalore Diagram with Daily and seasonal rain:

The overall State average is also +14%.
So, with more to come this month, Karnataka is reaping a good harvest from SWM.

On Wednesday11th:
The UAC enters the Arabian Sea via Konkan, and can strengthen the West Coast trough (for a couple of days)...
On Wednesday 11th September:

The UAC enters the Arabian Sea in the South Konkan region. Thus, the west coast trough gets activated.
Another East-West trough at 925 mb level and 850 mb levels, runs from North TN coast to Central Bay.
Thunder showers will occur in Konkan, Madhya Maharshtra, N.I.Karnataka and Northern TamilNadu.
Orissa and Kolkata can get thunder showers on Wednesday.
Regions to watch out for heavy rains: Entire Madhya Maharashtra belt (Nasik-Pune-Kolhapur-Sangli), adjoining N.I.Karnataka, Goa and parts of North TN.

Pune: Thunder showers in many parts of city and surrounding regions. Many areas will get upto 25-30 mms of rain.

Chennai: Thunder showers in some parts of the city and outer regions. Rains may increase from night. Upto 20-25 mms (avg) expected by Thursday morning.

Delhi NCR: As the axis goes South, Easterly winds will prevail over the region. Some moisture may bring a few showers in some pockets in NCR.

Thursday 12th/Friday 13th: SWM may withdraw from some more parts of Punjab, Haryana and Rajasthan.
The monsoon axis slides southwards towards the Central India region. With the high pressure at 850 mb, and reducing UTH, it becomes favourable for the SWM to withdraw from regions in Northern and NW India on Thursday.

An UAC/low pressure may form of the North AP coast. This would be embedded in the trough mentioned in the Wednesday narration.

Thunder showers continue on Thursday in Madhya Mah/Goa and int North Karnataka, but on a reduced scale. Konkan will get thunder showers.

Mumbai: Cloudy day, and thunder showers by evening in many parts of city. Decreasing thunder shower intensity in outer townships.

Pune: Thursday will also see showers in some areas, but chances of showers on Friday are less.

Chennai: Thunder showers in many parts , and rainfall amounts increasing over Wednesday . On Thursday, it will be cloudy and daytime showers will keep the day temperature lower. Rain amount will be around 35 mms by Friday morning. Friday some showers again, but rains reducing by night. 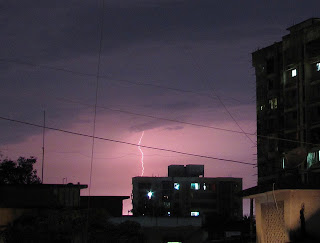 Pic taken by Tejas Baxi from Borivali,Mumbai on Tuesday evening

The UAC is currently over Interior Southern AP, but  the associated upper level trough in the SW, of the system extends upto Madhya Mah.
The trough, is likely to extend  into the Arabian Sea. 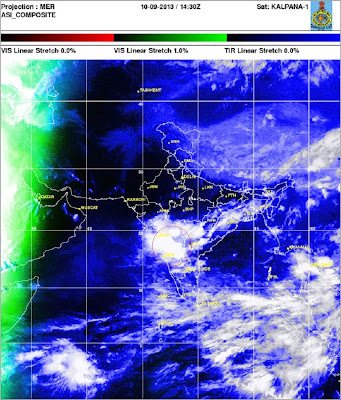 Great job may i know from where you have recorded these readings...

Great summer(june-sep) rains for chennai and chennai AP in particular ...chennai AP so far guess crossed 60 cms and we have one full rainy season to go...
keeping my fingers crossed for NE monsoon..

any idea on intensity of the NE monsoon.

karthik: i have put up more on current weather page, received from PJ.
Your comments are welcome and informative. Request you put in your name (Karthik) rather than multiple names..it gets too complicated ..Thanks

The Mumbai radar shows all 'red' in the precipitation view indicating intense amounts of rainfalls occurring in pockets around Mumbai. Considering the large drop in pressure, Mumbai could be in for a whooper of a Storm tonight

It has already turned stormy in Vasai, looks like todays storn will be on a heavier side. later in the evening.

@rajesh, thanks.. you can call me karthik. i kept my display name as jon but its not getting reflected ere

@krishnakumar, its available in IMD AWS

thundering has commenced in Vasai

The rains started at 5:00 PM at Juhu with thunder, rains were mostly light / medium. However, few minutes back the rain intensity has increased with much increase in lightning and really loud thunder. It is now raining and thundering for close to 1 hr. 45 minutes

OMG Schools are closed in chennai tom due to rains... normally this happen only in NEM time...

Rains were heavy in Vikhroli and Bhandup area eastern suburbs of Mumbai.

Rains started again in Juhu around 10 min back. There appears to be a distinct drop in the temperature here, very similar to what we see in October Thunderstorms.

Thunderstorm lashing parts of Goa. Beginning 2 pm. Almost an hour into it now at Margao, with no let up. Bit unusual this time of the year. Mostly occurs in October!

I think this year SW monsoon will withdraw 15 days early and NE too will set in early. Wind direction, kind of weather appears like that in mid Oct.

Thunderclouds have started gathering in Vasai.mild thundering could be heard from far

Thundering is getting louder and frequent in Vasai, also getting darker n darker

Just checked the Mumbai Radar, I noticed that one large cloud is appearing to have gone higher than 18 KM!! This is between Dahanu and Nashik. The rain dashboard shows complete 'Red' in that region, I am guessing it must be quite a storm there.

Heavy rain started in Badlapur from NE with lighting & thundering.

yes guys, its October type weather like you mention...but its the SWM withdrawal process, and as you have seen in vagaries, the SWm has started withdrawal from NW.
It may be a bit early, but should be around 25th september for complete withdrawal for Mumbai and Maharshtra.
I am just keeping a watch on the possible formation of a low in the Arabian Sea around 22nd Sept..

Dam was already full so 10,700 cusec water was released immediately in Pavana river & warning was issued for low lying areas near river bank.

Why such thunderstorm not occuring in mumbai.

Why such thunderstorm not occuring in mumbai.

Thunderstorm also lashed Dombivli with continuous Torrential rains , Huge lightening strikes with severe thunder sound.I was not able to sit near windows & watch out the rain as Huge Vertical Lightning was continuously flashing with Burst of Thunder Sounds.And we are getting Heavy rains here for the fifth consecutive days.

useless thunderstorm had come to Vasai with no rain