Today's weather events of rain/snow and winds can be compared with the last Vagaries forecast put up for the period 19th-22 Feb.
F3 has arrived into India.The high altitudes of Kashmir Valley, including the hill resorts of Gulmarg and Pahalgam, experienced a fresh spell of snowfall, while the plains including Srinagar were lashed by rains today, Saturday, 19th.Feb.and so far two inches to over one feet of fresh snow had accumulated on the ground.
Gulmarg, which had recorded nearly five feet of snow early this week, had received three inches of fresh snow till 1100 hrs, while its peripheral areas including Kangdoori, Aferwath and Khilanmarg experienced over one feet of snow.
Gulmarg was the coldest place in the valley with a low of minus 7.8 degrees Celsius
Kargil dipped to -18c today morning, while Darbuk at -26c in Ladakh continued to be the coldest place in Jammu and Kashmir.Leh recorded -10.8c on Saturday morning.
The cities on the western coast of India were wiindy today with strong N breeze sweeping the region.
The Eastern states of Orissa, Chhattisgarh and Jharkhand received medium rains today in the day. Cuttack measured 4 cms of rains. Effect of the UAC (o 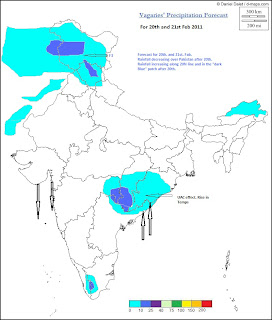 ver A.P./Chattisgarh today) mentioned in Vagaries 2 days ago.
Forecast Map for 20th and 21st put up .
Regions of Chattisgarh, Eastern Vidharbha and Orissa are likely to get rain/thundershowers from Sunday thru Tuesday.
Nagpur should get rain/thundershower on Sunday ,with rain possible on Monday as well.
F4 is on its way and expected to precipitate rain/snow in Pakistan from 22nd Feb. The regions affected by F4 will be Balochistan, Punjab and Norther Pakistan areas. The system will move into India on the 23rd, and precipitating rain/snow in Kashmir, H.P. and Utteranchal next 3 days.
Next forecast map for F4 will be put up on 22nd. Feb.
Mumbai had a breezy day with Colaba seeing a high of 28.6c and S'Cruz 29.6c. (Vagaries estimated 29c as today's high). The low was 19.1c at Colaba and 15.7c at S'Cruz.
By Rajesh at February 20, 2011