Massive Giant Storms of the U.S. and Yasi magnitude draws major attention of meteorologists, but some minor happenings are on around the Indian Sub-Continent:
Southern Region:
91B is currently situated at 5.9N and 83.4E. Wind speed just about 15 kts.and pressure at 1008mb, its just about qualifies as a well marked low. Being embedded in the E. wave, we should presume it to travel east and cross the Sri Lanka coast by tomorrow.Sri Lanka east coast can expect heavy rains due to this system, and some "spill over" on the South T.N. coast. Rainfall into T.N. will not be really heavy, just about as indicated in Vagaries forecast map.
Northern region:
Firstly I reproduce the blog of 31st. Jan ..so that a continuity is maintained and references are easier..
"Approaching W.D. will precipitate rains in Dubai from Tuesday evening thru Thursday. Cooler temperatures in Dubai on 2/3 Feb due to overcast conditions and rains.
Rain/snow spreading to Western Pakistan (Balochistan) and Central regions on Wednesday/ Thursday. Effective rainfall could be possible in Central Sindh. UTH maps indicate scattered rainshowers also possible along Sindh
coast on Thursday.
W.D. will be in force in to N.India from Thursday 3rd. Feb."
....The anticipated W.D. is now over Pakistan, where precipitation should have commenced from Wednesday night in the Northern, NWFP and Balochistan areas. Overall, these regions will get good rains/snow Thursday thru Saturday, with Upper Sindh areas getting the odd thundershower on Thursday/ Friday. Sukur and Jacobabad might see these showers.
Actually, on Thursday, the W.D. low is centred over Pakistan's Punjab region, with the precipitation belt stretching from Dubai NE thru Balochistan, Punjab (Pakistan) into Northern Pakistan and North India.
Dubai has received rains today, Wednesday from this system. Strong winds raised sand an 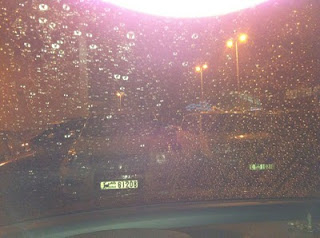 d dust, and showers lashed the city between 6pm and 7 pm. A reader has put up this pic today taken from her car.
Moving into India from Thursday, states of Kashmir and H.P. will receive heavy snowfall onThursday thru Monday, and disruption likely in the 2 states due to snow accumulation.The system is expected to persisit due to trough in the upper air stabilising for a few days over the region. Rains/snow in the Northern regions of India will hang on till Monday, after which it will penetrate into Utteranchal hills, U.P. plains and western Nepal.
The plains of Punjab and Haryana will get thundershowers, with the odd one popping up in N.Rajasthan.
Nepal areas will start getting the benfits of this system from Sunday. Kathmandu should get the rainfall on Monday, 7th.( am I attempting an extra long range forecast??)
Cold conditions will re-establish over India and Pakistan from this weekend.
By Rajesh at February 02, 2011

"Cold conditions will re-establish over India and Pakistan from this weekend."

This is great news. What data or source behind this prediction?

Rajan, you are a much more experianced meteorologist than me, (and I follow your blog regularly).
You know, to follow, or just blindly putting up a forecast from any one model would be having to eat back your words..i mean your forecast.

Using a combination of various reliable models, I would then conjecture my own forecast based on past similar situations experience (40 years now) and put it up in Vagaries.
I have mentioned once in Vagaries, that estimates put up are generally my working and on basis of past similar events.
Not to say I am always correct, but I have also seen international models take a U turn in their next 24 hrs forecast. So, generally I depend on personal judgement.

You can see from the vagaries archives that I put up a Monsoon Watch series starting every April. Through this we (readers included) monitor the stage by stage movement and progress of the SWM. Entirely on facts and past similar circumstances.