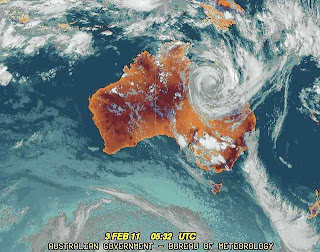 Yasi still remains a Cat. 1 cyclone as it moves across the North Queensland interior. Convection is weak around the system and cloud top temperatures have warmed since Yasi crossed the coast.

Yasi is expected to maintain a W-SW track as it moves towards Central Australia over the next couple of days. Although the cyclone is rapidly
weakening over land, strong and gusty conditions continue.
The current core pressure is still low at 980 mb and the winds at a strong 90 kmph and gusts at a violent 130 kmph.