Posted 26th May Night:
We had mentioned in our last Monsoon Watch that the cross Equatorial winds, Somalia SST  are yet to strengthen. 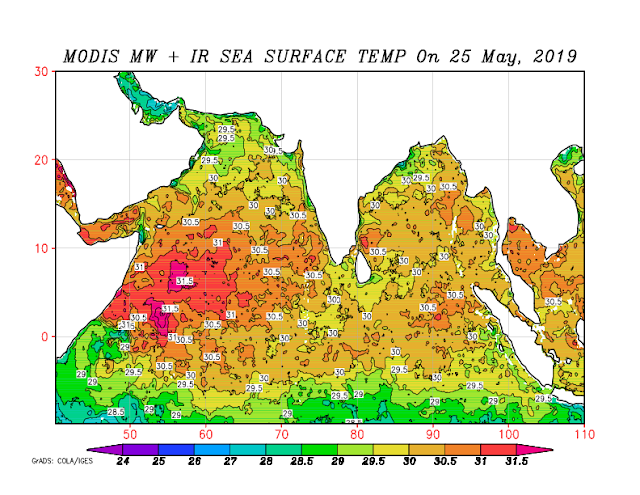 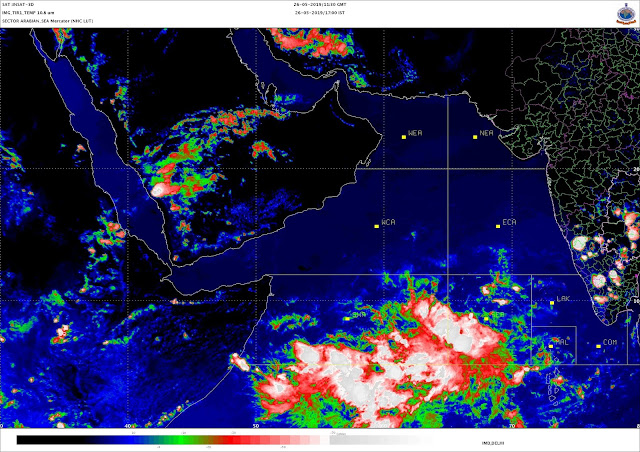 This development is keeping the momentum alive. This is directly linked to the SST variations in the Arabian Sea.

Thus we see the South West Monsoon advance delayed by 3/4 days beyond 27th May (estimated date) for the Maldives. Subsequent delay (proportionately) for further regions will be monitored.
The Bay branch lags behind our schedule, and the Monsoon should cover the entire Andaman region by 29th May ,with some positive signs seen.

Heat wave conditions are likely next 4 days in Vidharbh and Telengana. Temperatures in Chandrapur and Nagpur likely at 46/47c.

North India is likely to see a rise in the heat in the next 3 days. New Delhi may record 45/46c during the week.
Days expected to get hot (above normal) in Odisha.

Mumbai: As mentioned, the first pre monsoon rains will be seen in the first week of June.
From Monday, Next 4 days will be humid, sweaty and hot, with the temp around 34c, and humidity high enough to make a real feel factor of 41c. (Real feel is what the body actually feels considering the temperature, winds and humidity).
Pune: (Next 4 days) Hot around 39/40c and dry. Strong winds in the day. Partly cloudy on 29th.
By Rajesh at May 26, 2019

Approximately 222 days since it rained last time in mumbai(Santacruz). Hopefully rains arrive in Mumbai as soon as possible.

The Pacific Ocean and overlying atmosphere remain close to El Niño thresholds, so the ENSO Outlook remains at El Niño WATCH. Models indicate the tropical Pacific Ocean will ease away from El Niño levels, becoming neutral during winter. The Indian Ocean is expected to become the dominant influence on Australian climate, with models predicting a positive phase of the Indian Ocean Dipole (IOD) is likely to develop in the coming months.

An active phase of the Madden–Julian Oscillation in the last fortnight weakened the trade winds and brought a small rise in sea surface temperatures (SSTs) in the central and western tropical Pacific Ocean and a drop in the Southern Oscillation Index (SOI). This has sustained the El Niño-like pattern in the Pacific. While a prolonged weakening of the trade winds could elevate El Niño chances once again, the majority of surveyed models suggest the tropical Pacific will cool to neutral levels during winter.

In the Indian Ocean, further warming off the horn of Africa has meant that the IOD index exceeded the positive threshold value this week. All but one of the models surveyed suggest positive IOD levels will be maintained throughout winter. To be considered an event, these values would need to be sustained for at least two months. A positive IOD often results in below average winter–spring rainfall over southern and central Australia.

Ramagundam heat is normal for this time of the year as it is coal region hence heat will be exceptional.
Interstingly, north west india did not face continous hot days thanks to western disturbances.