1.Cross Equatorial Winds :
Let me explain, that the winds on crossing the equator break into 2 branches. i) gushing into the Arabian Sea, and ii) moving into the Bay of Bengal.
wind flow on 4th May 2019 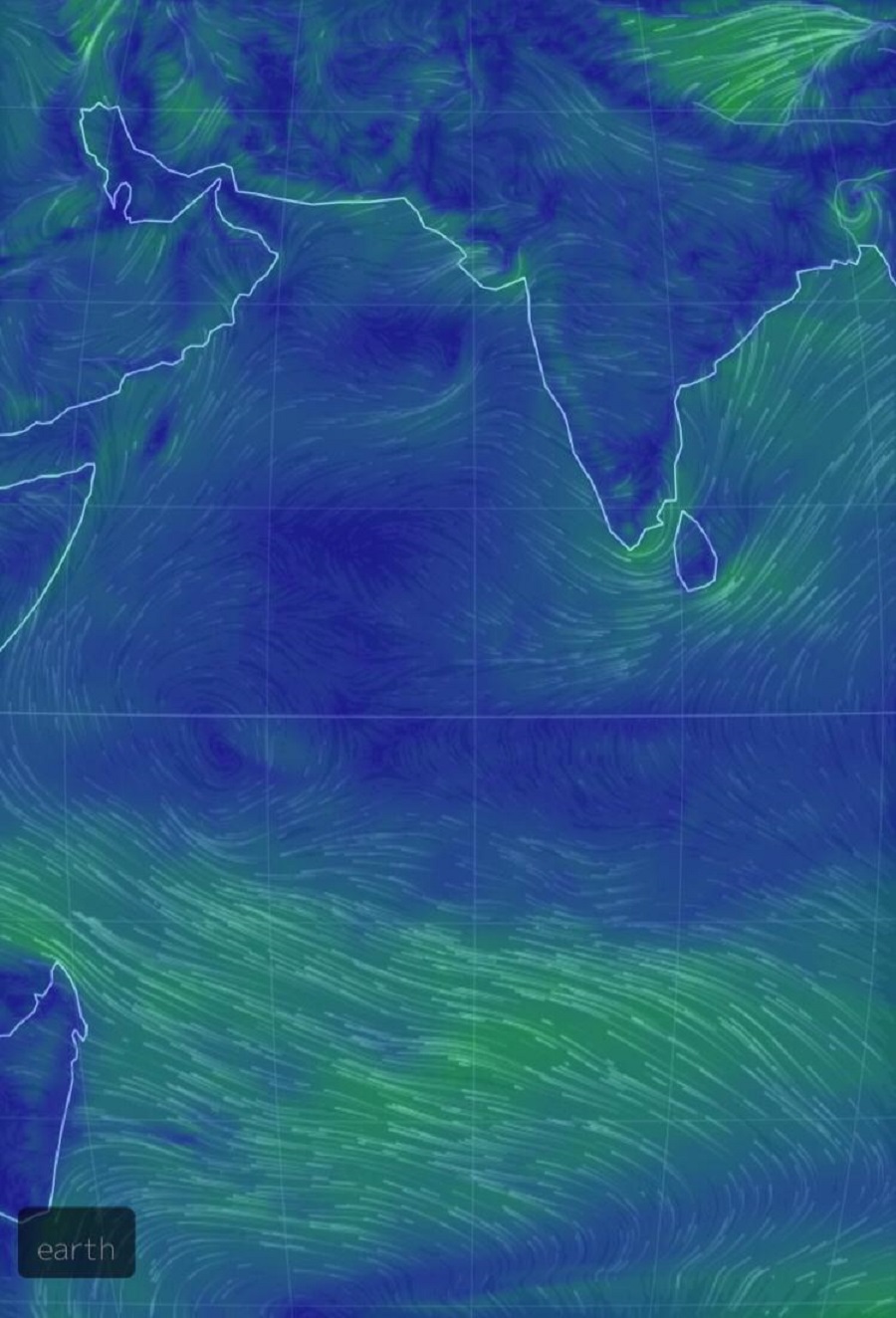 i) In the Western sector Southern Hemisphere, winds are just picking up speed and hitting the East African coast, but no proper re-curving is seen. To get a defined Somali Current, we need a proper re-curving Northwards/North-East of the winds, on the Kenyan coast. The current SST off the Somali Coast is 28 c (above normal),while the required SST in first week of June is 19/20c. (Required to form masses of Monsoon clouds in the warm central Arabian Sea).

ii) In the eastern sector, in the Bay Branch, the cross equatorial winds are currently following the Deep Depression (Fani)
We prefer the Bay Branch to be better organised, as the normal date for SWM to hit the South Andaman Sea is 15th May.

Mascarene high pressure zone in the South Indian Ocean.
Main High reading of 1026 mb and other highs of 1017 mb are currently observed between Madagascar and Australia. 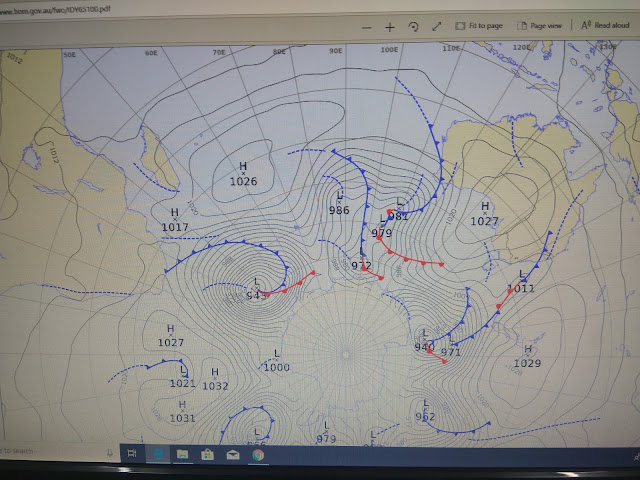 The "Power House" of the Monsoon winds is lower in strength (should be 1032 mb), for this time of the season.

The NW plains heating picked up initially, but stabilised again, as WDs started streaming in.
After the early summer onslaught, the heat decreased a bit over the North and west subcontinent between MW-2 and MW-3 period. Central India went through a heat wave.

Past 7 days anomaly -
North ,west ,central India was in the warm/hot range. 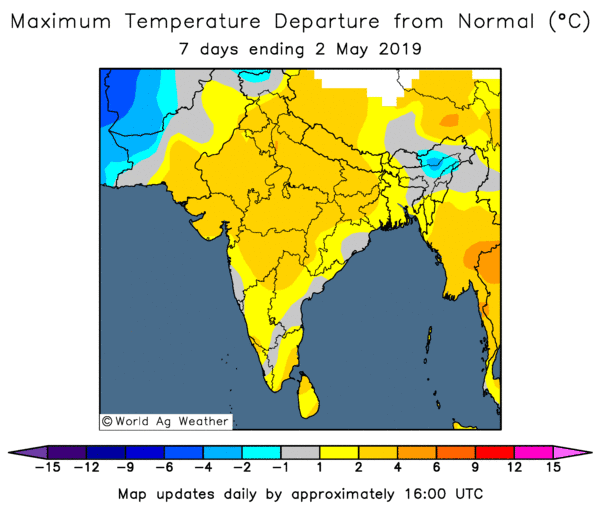 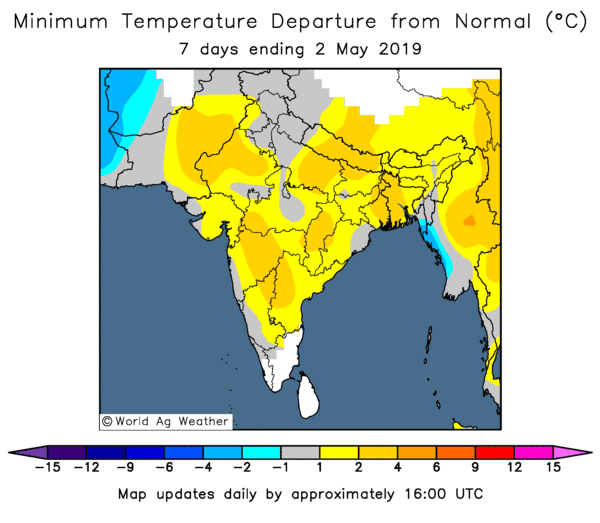 Min temp was in the above normal range.

The seasonal Low, as a result has not improved. Had shown good progress during MW 2.

As mentioned, it normally should reach a low nadir of 994 mb in June in the Thar Desert, and with 1008 mb in the South Arabian Sea, a perfect gradient is created to attract the south -west winds towards the coast. 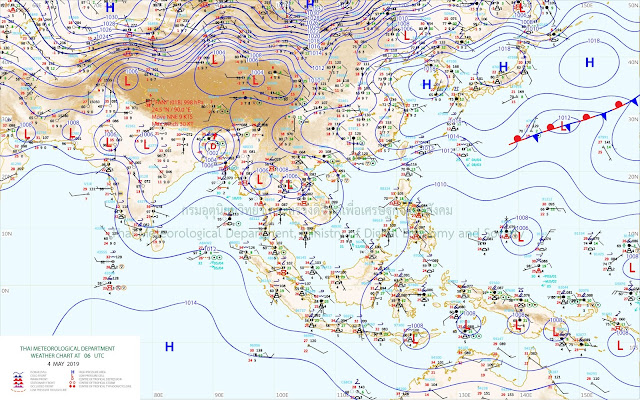 
The highest max temperature (47.5 c) over the subcontinent  was recorded at Khargaon (M.P.)

After a lull, the minimum temperatures have also increased over the subcontinent and have just started touching the 30 c mark .

The Oceanic Nino Index (ONI) is based on SST departures from average in the Niño 3.4 region, and is a principal measure for monitoring, assessing, and predicting ENSO. ONI has increased marginally after MW2 and latest value is 0.8 .
( ONI of -0.5 to 0.5 is neutral. Above 0.5 is El Nino, and below -0.5 is La Nina).

Indicator: ENSO should be watched for El Nino development in August/September.

What is needed now is a pulse from the Far East. But,currently there is no storm or low pressure in the Philippines’ Seas.

A strong MJO would hasten the favourable formations and lows, with enhanced precipitation. The Madden–Julian Oscillation (MJO) at present lies over Indian Ocean (Phase -4) with high amplitude (more than 1). It is very likely to move in Maritime Continent (phase-5) with high amplitude during next week and in phase-6 during subsequent week.

Another factor, which helps the winds gain strength, and bring more moisture into the Indian landmass, is the sea temperatures on both sides of the Peninsula. Optimum (warm) temperatures will hasten and create more clouds, and help in faster forming of the lows from the Bay.
Currently, the only sort of  sign is the normal temps (28 c) of the seas surrounding the peninsula. But sea temps (29 c) near the South Andaman Sea are higher.

We prefer the Bay parameters to show fast progress, as the normal date for SWM to hit the South Andaman Sea is 15th May.
Indicator: -ve

5. ITCZ / LWD :
To bring the existing SE winds above the equator (as SW) , the ITCZ should move northwards.Currently it is near the equator. During late April , it oscillated between equator to 5N.

A LWD in the central peninsula region "looks after" the moisture content in the interior areas, and prepares the atmosphere with the humidity required. In reality, this LWD remains till June, in variable phases, and finally merges with the Monsoon trough (axis)/ITCZ  when the ITCZ moves towards the Sub Continent.

Currently, the weak line of wind dis-continuity is located as a trough, through the peninsula, from Madhya Maharashtra towards Kerala.
Outbreaks of pre- monsoon thunder showers which are expected normally in the southern states and South Maharashtra, are not in full vigour yet.

The 200 hpa Jet streams over the subcontinent is the additional parameter to be watched from MW-3 .

The jet streams are to be followed as the westerly jet core shifts to the north and easterly jet stream is formed, over the course of late summer, progressively from south to north of the subcontinent , heralding the progress of south-west monsoon over the subcontinent.

Currently are weak south-easterly, south of 8 N latitude.
They are required to strengthen to easterlies at those latitudes in the coming days, for heralding the SWM to the South Andaman Sea.

The westerly jet core shifts north of the Himalayas during the southwest monsoon season, as the jet streams turn easterly over the subcontinent.


So, overall, we can summarize as:


*But, situations can change fast, and by the time we discuss the next  MW, some factors can suddenly become +ve or -ve. So, MW discusses and follows the developments as they emerge, and discuss the parameters as is where are.

Looking at the current parameters, there seems slight delay in the South West Monsoon arrival dates for Andaman and Kerala as of now.

Monsoon Watch should not be used/depended upon commercially or otherwise. Monsoon Watch Series may differ from other models.
By Rajesh at May 04, 2019

Thanks for the update Sir.. was eagerly waiting for the SWM onset dates!

Most of parameters inclined towards negative as of current conditions.. So onset dates look slightly delay with of 2 days at most places but that usually can be consider within normal frame.

The advance of the Arabian Sea branch of SWM is also tricky with the likelihood of formation of cyclones due to strengthening of the monsoon onset vortex. It will be interesting to see how things evolve this year given the possibility of MJO being in active phase over the Indian Ocean by the end of May.

I'm following your your page since 2012 sir as i found your page through kea blog in tamilnadu and I'm running a weather forecasting page called coimbatore weatherman for tamilnadu people.. i find your page very informative and you guy's are doing a great job in analysing technical parameters required for monsoon watches.

Over the years you have been so acurate in your forecsting that one who follows you would not have to look at even IMD website for onset of SWM and Quantum of rainfall and once season sets in, the forecasting of rainy spells all over India. You are so dependable and perfect in your forecasting and analysis. Thanks for sharing your knowledge through this blog- Appreciaitng your hard work as always-

Sset is right. South east india is getting very less rains and has been a very difficult summer.