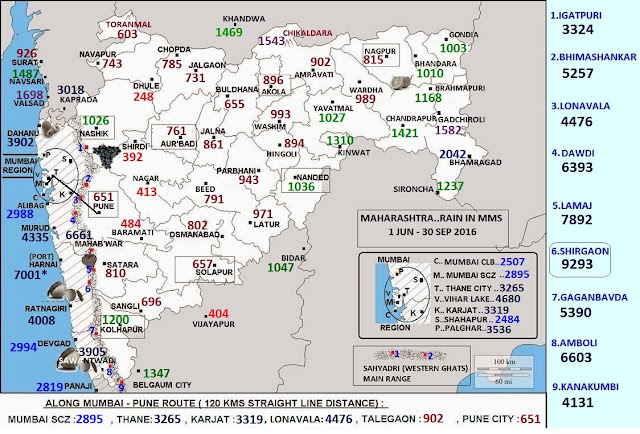 Rajeshbhai, why will the rain intensity increase on Tuesday?

Rajeshbhai, I read the flash snippet and hence wanted to ask what is going to cause the increase in the rain intensity on Tuesday, apologies but didn't find the reason for the increase mentioned in the Flash Snippet

nt: As explained before in previous blog, an upper air trough will form on Monday East-West from 65E across North Konkan. It will intensify (most probably ) on Tuesday, enhancing rainfall along North Konkan
South Gujarat,specially North of Mumbai. Possible of an embedded UAC forming due to upper air divergence.

Its raining in malad since 1 hour or so with light intensity. But its very foggy.

How much rains in mm we expecting in Mumbai next 2 days? Must be total of around 100 mm next 2-3 days.

Overall Monsoon R F must be from date of being setting in till date of withdrawal- will it make more comparable data?

Rajesh Sir, can we expect the hot and humid weather to recede from Delhi-NCR in the next 24 hours?

Vijith Menon: Current cloud formation seen since yesterday off Mumbai Coast in North Arabian Sea is due to the upper air trough and embedded UAC in it...Refer previous blog. Now, by Thursday, this can descend as a Low off the Southern Saurashtra Coast, and may bring more rains to Southern Saurashtra and the Gulf of Khambhat (which divides the Kathiawar peninsula to the west from the eastern part of Gujarat state).
Good rains are expected in these regions of Saurashtra next few days also.

Nilay: Yes, Mumbai getting good rains on Tuesday. Also as we mentioned, Surat got increased rains on Tuesday after the Monday Thundershower. Heavy Shower on Tuesday morning brought 103 mms till 8.30 am.
In our Vagaries extreme Blog, I have taken the total Seasonal rains, even when it ended in October as Monsoon total, which i mentioned a few days ago on this blog. I gave total of Mumbai till end of Monsoon...

Yes Rajesh sir, should not be a norm all over India taken up by IMD?

what is your view about further withdrawal of SW Monsoon
specially in central India ?

Absolutely pounding here(goregaon) for the last 20 minutes. MCGM app also confirms that it's pounding in Goregaon

Hi Rajesh, how is the outlook for Mumbai for the next few days of the week ?