Vagaries Views..Posted Friday Night:
BB-14, a depression with estimated core pressure at 1000/1002 mb and estimated core winds at 20-25 kts , is located at 14N and 90 E. Seemingly stationary, but has taken an anti clockwise loop and come back to yesterday's position.

Divergence at the 200 levels is seen, thus and along with vertical wind shear over the core region, we expect further intensification of system. Will become a Deep Depression by Saturday, and in all likely hood a cyclone by Sunday/Monday.
Expected to track E/NE towards the Myanmar coast near Pathein.

As the system intensifies off the Myanmar coast, 200 level winds guidance and no 500 level ridge resistance will steer the stem BB-14 from th Myammar coast to re-curve and track NW towards the Bengal coastline.Expected there by around 25th October, depending on the re-curve spped.

In this scenario, the NEM can get delayed beyond the expected 24th date...

A well marked Low, BB-14, has formed in the Bay, at 14N and 90E to be precise.The UAC from BB-14 extends to the Upper Air levels.
Currently, the convection and precipitation is in the SW quadrant, along with maximum winds at 20-25 knts. 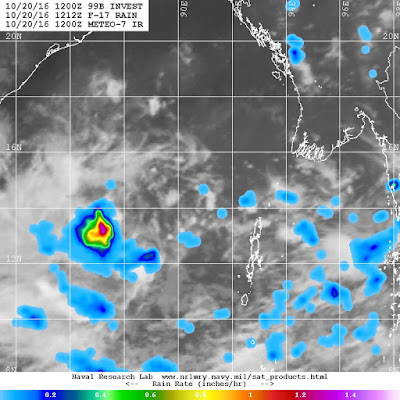 This system is likely to deepen into a depression in the next 24 hrs.
Some International Models suggest BB-14 to move in a NE track and towards the Myanmar coast. The system then hits the Myanmar coast and moves inland.
Another Forecasting model makes the system just graze the Myanmar coast around the 24th, and then forecasts a W/NW track towards Odisha on the Eastern Coast of India.Another forecast, in agreement with IMD, suggests the system to go towards Bengal after the brush with Myanmar.
One particular model forecasts a direct track NW towards the AP/Odisha coast.
These various track estimates are based on certain uncertain Upper Winds and STR at 500 level, which is positioned in far West today, and the tracks of 2 consecutive WDs.

Since I am unable to estimate the track of this puzzling BB-14, would like to read comments on possible track from readers. Please post your views by Saturday.

99 b invest will follow periphery of 500 hpa str...which is sitting in west over north-central arebian sea n adjoing areas but its axis eloangated upto bay..all models changes depand on 500 hpa eloangated str position ...n upcoming wds i think the system will graze the myanmar coast n head toward bangla/bengal thereafter.....uncertainity is still there due to monsoon is switching from swm to nem....may be changes should happen

Sir because of the Typhoon the ridge to the right is further away as of today, in the next couple of days it is possibly moving in from East as the typhoon weakens, that could possibly create a poor steering environment as the system will be wedged between two ridges. Currently until it intensifies into a proper depression it could move with the wind flow in a NE direction. Not an expert so could be wrong

Well, here is the link to the forecast path by the various models, namely GFS, NAVGEM, GEM, GEFS, GEPS, etc.: http://www.tropicaltidbits.com/storminfo/99B_tracks_latest.png Most of the forecast models show 99B Invest going towards Myanmar and then quickly changing direction towards Odisha (India). Most of the models, including the most reliable ECMWF, are showing 99B Invest going towards Myanmar till 24th October, then changing direction towards Odisha (India) and strengthening before making landfall in India on 29th October. However, this forecast could change in the coming days.

Sir, will this system will bring the NEM onset or NEM onset is still far away

If it hits the coast, there might be heavy rains in the coastal North Andhra Pradesh and Odisha

I am not too convinced about the low re-curving back towards the Indian coast - i feel the low itself would want to come towards the Indian coast but upper level winds will try to push it further into the interiors of Myanmar. The result, I feel, would be something in between - maybe it will track north for a while towards Bangladesh maybe , and then move east and fizzle out. (Just a crude guesswork!)

How a system in mid october can move north east, when high pressure zone over north bay and anticyclone over central burma. this might re-curve south west after initial north east movement.

Not sure what is happening to cyclone - but concern is NEM impact - major hurdles -> long long SWM, then typhoons, now cyclone for NE India - guess next WD will promptly arrive.
Entire SE India will become desert! - SWM failed and now NEM may fail for South India.