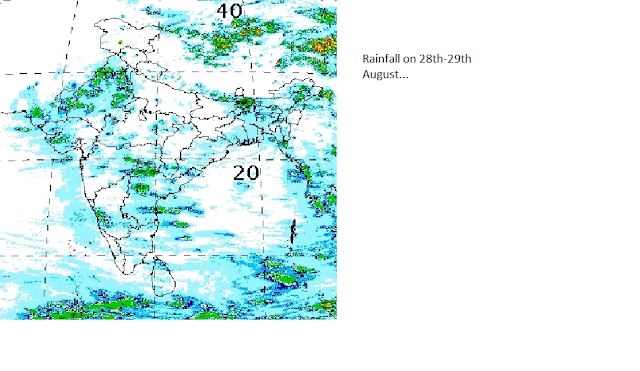 Till Monday morning, in Western Rajasthan, rainfall was heavy: In cms:DUNGARGARH 9, SANGARIA SR 8, NOKHA 8, CHURU 6 (and another 3 on Monday)
LADNOO 5,ROHAT SR 5.

3. A weak trough runs Southwards from Jharkhand towards the BB-10.
Kolkata had heavy rains on Monday, with Alipore recording 79 mms till 8.30 pm IST.

Areas of Local thunder showers "popping up" in North Raj, Delhi NCR, M.P, Vidharbh, Marathwada and some parts of Gujarat and Saurashtra probable on Tuesday and Wednesday.

Dungargarh is dry place near bikaner.good to hear about heavy showers here .my native place.
Average rainfall near to 250mm.dry city.but if rainfall happen then it is very heavy

In the tropical Pacific Ocean, the El Niño—Southern Oscillation (ENSO) remains neutral, but a late and weak La Niña remains possible. In the Indian Ocean, a negative Indian Ocean Dipole (IOD) continues, but has weakened from record July index values.

International climate models surveyed by the Bureau suggest the negative IOD will weaken during the southern hemisphere spring, and is likely to end in November. This means its influence on Australia’s spring rainfall may not be as strong as it has been during this winter, when wetter conditions prevailed in the east.

In the tropical Pacific Ocean, sea surface temperatures are cooler than average, though remain well short of La Niña levels. In the atmosphere, there has been little change in trade winds or cloudiness, indicating little or no coupling between the atmosphere and ocean. As a result, cool sub-surface temperatures have eased slowly towards normal. International climate models suggest neutral to weak La Niña levels for the remainder of the year. A La Niña WATCH remains in place.

During La Niña, northern and eastern Australia typically experience above average spring rainfall, with the first rains of the wet season typically arriving earlier than normal in northern Australia. Some La Niña-like effects can still occur even if thresholds are not exceeded.

Next update expected on 13 September 2016

Please always mention your name and place whilst writing comments. It helps in closer understanding and easier to correspond. I have mentioned it before and request please give name with comment . Thanks