2. Meanwhile, Monsoon axis now in the Northern Parts Passing From Pak Punjab thru U.P. and into BB-8.
Hence, very Low amounts of rainfall, except in U.P./M.P.region on Monday 15th (Due to an embedded UAC in the axis).

4. Rains persisting in East M.P. and Heavy rains in Odisha from Tuesday evening. 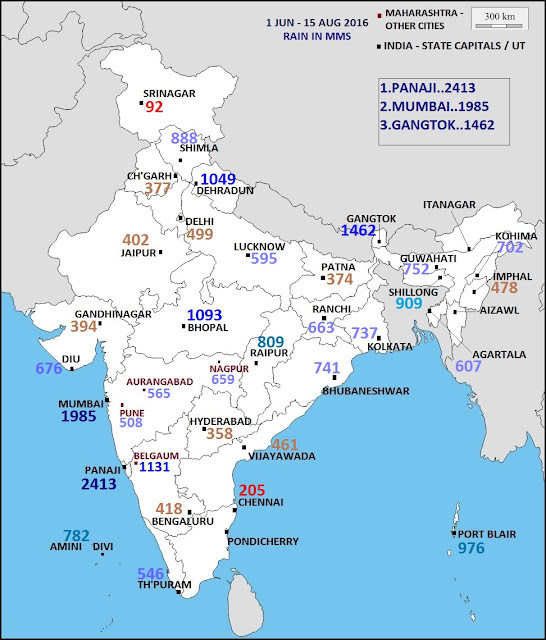 when indore and ujjain get good showers in coming days??

what will be your forecast for Mumbai region for next 1 week ??

Climate models indicate the negative IOD will continue to steadily weaken over the southern hemisphere spring. This means its influence on Australian rainfall may lessen in the coming months. Rainfall has been well above average for large parts of Australia since May 2016—which is a typical rainfall pattern observed during negative IOD events. During negative IOD events, southern Australia typically experiences above average winter and spring rainfall and cooler than average daytime temperatures. Northern Australia often experiences warmer than usual day and night-time temperatures.

In the Pacific Ocean, only two of eight international climate models monitored by the Bureau indicate La Niña is likely to develop during the austral spring, with two more indicating a possible late-forming event in summer. The remaining models suggest neutral or near-La Niña conditions. A La Niña WATCH remains, but if La Niña does develop it is likely be weak.

During La Niña, eastern Australia typically experiences above average spring rainfall, with the first rains of the wet season often arriving earlier than normal in northern Australia. Some La Niña-like effects can still occur even if thresholds are not met.