Mumbai: Monday 6th/Tuesday 7th/Wednesday 8th: Partly sunny to cloudy skies. A couple of passing showers in some areas will bring much needed relief. But, rain amount may not exceed 5-7 mms per day. stuffy nights continue.
Interior regions of Maharashtra (Madhya Mah, Marathwada and West Vid) will remain practically dry without meaningful rainfall till next 4 days.

The Monsoon axis is stubbornly fixed in the North, and the fresh WD ( JL-1) is preparing to proceed, come what may ! 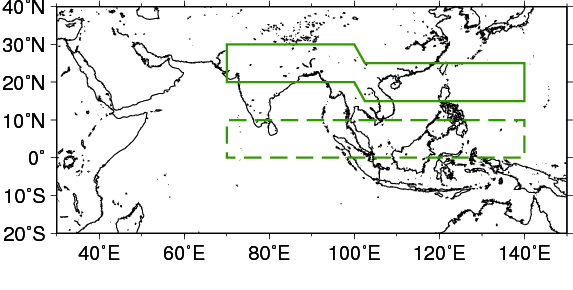 Tuesday 7th: Monsoon entering Northern Pakistan.
More concentration of heavy rains on Tuesday (more likely as the day progresses) in Pak Punjab. All regions in North Pakistan get heavy showers.
Gujrat (Pakistan) gets showers on Tuesday, amounting to around 15-20 mms on Tuesday.
Heavy falls in Nepal. Heavy rains also possible in Sikkim, leading to overflowing of local rivers downstream.
Rainfall in Indian NW regions may be a little less compared to Monday.

Delhi NCR will be cloudy with showers interspersed in the day. Around 30 mms Tuesday day and Night.

Wednesday 8th: The entire stretch from Pak Punjab thru Indian Punjab, Haryana, U.P, Uttarakhand and North Bengal get moderate rains.
Delhi NCR may get less rains also, but the intensity will be more on Thursday again.

From an already formed UAC,a Low ( BB-2) forms in the North Bay of Bengal on the 7th.
May concentrate in WML and maybe depression (992 mb), before crossing Odisha coast around 10th. But strength and Track depends on WD trough behaviour.

If JL-1 can bring down the Monsoon axis to the South near Rajasthan, then this BB-2 can possibly track West wards. If the persisting WD trough extends Eastwards, the BB-2 may head North. Vagaries is unsure of the track today.

West Coast trough remains weak next 4 days. Slight movements continue (seasonal). A "spurt" ...
1). In off Karnataka/Goa region will see increased rains in Goa on 7th and 8th. Maybe around 40 mms/day...and
2.) in the Northern end may bring some light rain relief to Saurashtra for a day on Tuesday/Wednesday.
Strong SW winds will continue in Saurashtra and Coastal South Gujarat next 3 days.
But most of Sindh (including Karachi) will remain practically dry and hot.temperatures may shoot to 46/47c next 2/3 days.

Chennai will continue to be very hot, around 40c next 2 days, with no meaningful rains till Thursday at least
Kolkata: Oh Calcutta ! And it goes on..Thunder showers again on Monday and Tuesday...around 15-20 mms average.

Thanks for throwing light on SAMOI-N

So it seems first half of July atleast wil be shortfall erasing earlier surplus. .. sir any impact of typhoons in Pacific Oceans? Are those connected with swm performance?

Nilay: As you see in the right side (top) of Vagaries blog, the deficit is already wiped out...The Monsoon performance is updated regularly in this space.
Also, I have explained in brief ( see diagram) the "Monsoon Activity" (axis) has shifted Northwards of normal position from Pakistan thru India, Northern Thailand and North Laos.
There are 3 typhoons in action now..."Linfa", "Chan Hom" and "Nangka" in line in the Pacific today. But they are all North of Laos. On Monsoon axis shifting South (if and when), then these typhoons could strike near Vietnam region , and that can help send pulse to Bay of Bengal. Otherwise, we have to wai for a 'in situ" puls, that is formed in Bay itself.

emkay: SAMOI-N is followed by vagaries as a "back up" when things like Monsoon axis gets into a "desperate" situation. Helps in getting long range time forecast for axis movement.

Sir, Your note was very interesting. My impression was that WDs are counterproductive to SW Monsoon. However it appears they are also pulling the monsoon further towards Pakistan and may also push the axis southwards from its current position. Could you give a short explanation please. Thanks

Thanks sir for quick reply on typhoons effecting swm performance. Thanks for inviting attention on daily update of swm performance. As I am habituated to use the android application missing out tht space.

Total Maharashtra is rain less on 6th July 2015 as per today's RMC Mumbai Daily weather report that too in well known wettest July month which is completely horrible scene !! :(

This is very rare event as I don't remember such daily weather report from RMC Mumbai in July ever earlier !!

As at least some Konkan towns or ghats area will report between 1 to 5cm in break SWM period..

Ashish: In this case, as i had mentioned, the WD merges with the Monsoon axis (see previous post). Hence, the axis also gets activated to progress the Monsoon.