1. Cross Equatorial Flow has picked up considerably in the Bay, and is touching 35 knts. In fact it is showing an independent trend, disassociating itself from the Arabia Sea branch. Winds around 35-40 knts (30 last year) are seen gushing Northwards off the Somali Coast. 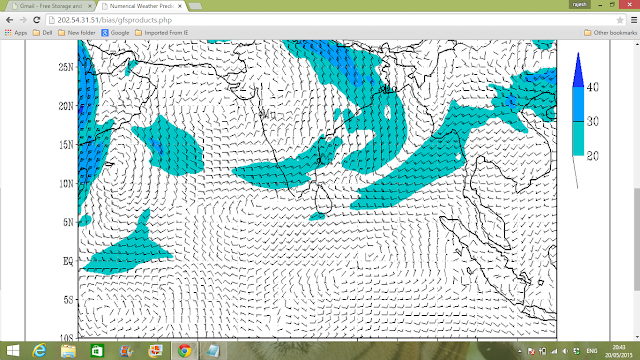 But the Arabian Sea branch is dis organised and shows no definite formations from the Somali coast to the West Indian coastline.
The Eastern branch of the Arabian Sea winds will gain speed, and SW winds will touch 30-35 knts near Maldives and Sri Lanka by the 23rd of May....Heralding the South West Monsoon in the region of Maldives by the 24th. Sri Lanka at this rate should get SWM by 26th May....and Kerala by 3rd June.

But the present fall is not sufficient to help form Monsoon clouds around the Central Arabian Sea.
A slight rise is seen in the Bay water's SST to 31c.

3.Seasonal Low...Currently dropping to core pressure 0f 1000 mb....But the strengthening flow from the Somali region will bring very strong gusty winds at 35-40 kmph along the Sindh Coast...windy in Karachi from 22nd/23rd.
This will enhance the drop in the Seasonal Low, which can go down to fall to 996 mb in 3/4 days by 24th May ! 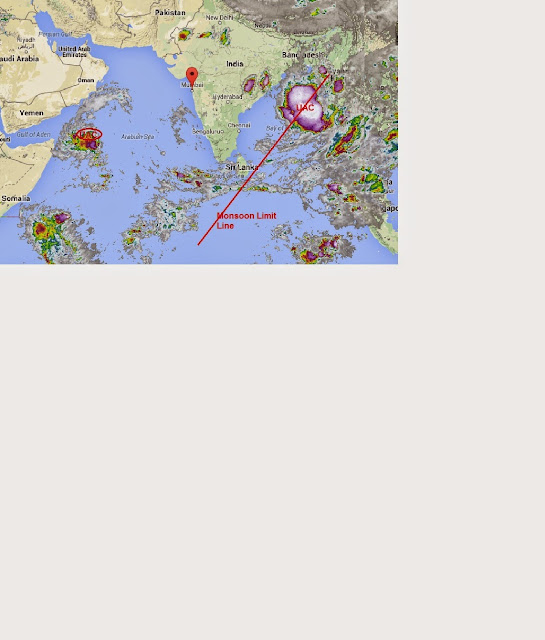 As mentioned yesterday, heat Wave prevailed in Vidharbha, with the highest temperature in India on Wednesday 20th May, being 47.4c at Chandrapur (Vidarbha). Wardha was 47.2c and nagpur 47.0c
Now, 21st and 22nd , Heat Wave is likely to spread to Telangana, and will prevail in Vidharbha and West MP.
Hottest in Pakistan on Wednesday 20th: Dadu, Turbat, Sibbi 47°C.

Mumbai estimate till Sunday 24th: Partly cloudy,Hot and sultry. Days in Mumbai will be around 35c, with humid conditions making the real feel temperatures around 41c in the afternoon !
A light drizzle in the weekend may add to sultry conditions..Nights will be very warm at 29c, maybe touching the rare 30c mark this weekend.
Hot and humid for Outer Townships also, no major change.

Goa will be sultry and partly cloudy. Light drizzles may occur during the weekend, bringing more humid conditions.

rajesh sir as per current senario in arabian sea sw monsoon delayed in kerela even bbc forcasted clear sky in cochin and trivandrum in last week of may and wind speed in arabian sea also not favourable for onset of monsoon.can this scenario change very quickly.my question to rajesh sir or other experts.

Nilesh Ladhad: I have given an estimate of Monsoon advancing to Kerala on 3rd June...now your region will be after Mumbai, that is around 15th June, or later. But can expect humid weather and light pre monsoon showers after 7th June..

Anoop: Curently heat is in West MP, Vidharbh and Telengana regions. But, as mentioned, i expect heat in NW India after 1st week of June.In June , after 7th, temps can touch 48c in Rajasthan.

Moshin: As explained, the Monsoon current will advance into Kerala around 3rd June...Situation will start with strong NW winds changing to SW in Kerala after 1st June...and then the gradient increases .