To take and assess the SWM performance, we refer back to the MW-4 (Part-1). We have to take into consideration most of the 15 parameters (Gowarikar Method) before making an assessment, and these have to be analysed one by one. The prominent among the 15 are , ENSO, March temperatures of North India and East Coast, Himalayan Snow cover till March and SOI to name a few.
Of-course, I am not going to take each and every one of the 15 here, but, derive at an estimate on these basis and on the new model developed. I hope readers of vagaries trust that I have tried my best to estimate as accurately as possible.

Most of the studies on LRF of Indian monsoon rainfall were based on empirical or statistical techniques till 2010. IITM, Pune has recently implemented the state-of-the-art coupled climate model, the Coupled Forecasting System (CFS) developed by the National Centers for Environmental Prediction (NCEP), USA. These statistical techniques range from simple correlation analysis to advanced procedures.

The performance of Vagaries' Monsoon Watch Quantum analysis is evaluated for the amount of summer monsoon rainfall over Indian monsoon region during June to SWM withdrawal in 2 phases. (June/July and August/September).
Why in 2 phases ? Because, I believe it is impossible to give actual Quantum forecast now (In May) for sometime in September...that is 120 days ahead !). I am not competent to give a forecast 90 - 120 days in advance, so Monsoon forecast will be  1)...For June and July and 2) then August and September ..this phase 2) will be published in 1st week of July.

Repeat: The 500 hpa parameter is of importance in April. The mean latitudinal location of the 500 hpa ridge along 75°E in April over India, first identified by Banerjee (1978), is considered to be one of the most important predictors. The mid-tropospheric anticyclone over southern India migrates from 11.5°N in January to its northernmost position of 28.5°N during July.
From October, the ridge starts shifting back southward. A more Northward location indicates better performance of the monsoon and vice versa. It also showed that the negative correlation of the March ridge was more dominant with the monsoon rainfall of the peninsular India, while the positive correlation of the April ridge was more dominant with the monsoon rainfall of Northern India.

ENSO factor in arriving at the rainfall amount is also of importance. The interface is the sea surface: that is where the transfers of water (evaporation/precipitation)
and momentum occur. An accurate coupling of the fast atmosphere to the slow ocean is essential to simulate the ENSO, which in turn can simulate the interannual
variability of Indian monsoon. Unfortunately, getting an accurate, or near to accurate forecast of the ENSO for the next 2 months is difficult, with no guarantee of accuracy or performance surety.

We see El Nino conditions now. But, there is a possibility of a full El-Nino event occurring as early as July. Now, this would result in "severe" break Monsoon condition in late July or August. That is the last thing we want. But I would not endorse the event as yet. I would give it a 50-50 chance.

Normally, Pulses from the Eastern Pacific area, that is S.China sea, would mean depressions and systems originating from the Bay. 'In Situ" systems and systems from the Far east would contribute to the rainfall to the east Coast thru Central India and into Gujarat and even into Sindh (Pakistan). El-Nino, even a mild one, would sort of restrict these pulses, and in fact encourage WDs into coming down south, more South than normal.

If we take into account, that the ENSO is today is El Nino and "leaning" towards a stronger El-Nino phase by,say,July, then:

a) Till July, we can see slightly below normal rainfall and progress of the SWM in parts of  Sub-Continent regions. Nino conditions in the Pacific Oceans will send a few "pulses" to create "in situ" systems in the Bay, and the first 2 months will see around 3/4 noteworthy systems traversing the Sub continent. WDs will be few, hence, we can expect a few systems to track towards Central and Northern India, resulting in good rains in the plains of N.India and Northern Pakistan regions..and fairly good above normal rains in Nepal.

During the Northern track of the system, the monsoon trough could be pulled far North into the Himalayas, and possibility of "short "break Monsoon in 3rd week of July or near around that time period.
Break monsoon situations, and winds bringing in moisture from the Bay (diverted to the NW directions) will result in excessive rainfall this season in Nepal, more so the Eastern regions. NE states of India will get continuous feeding from the Bay. (Cherrapunji/Mawsynram seems the likely candidate for the highest SWM rains). 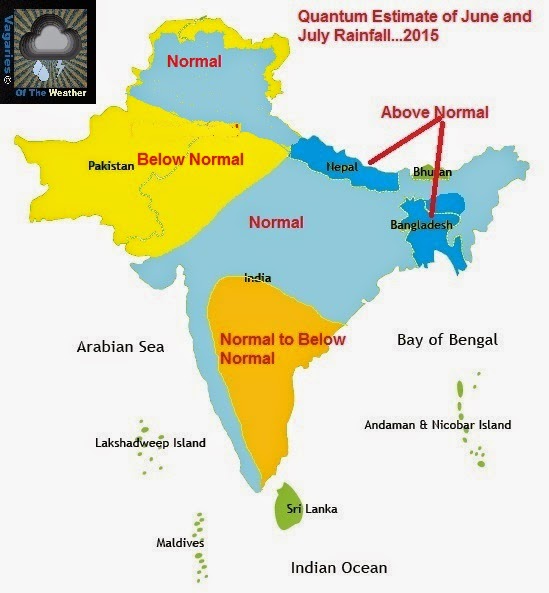 b) June sees heat wave in Northern India, and Pakistan..Temperatures upto 50c, which can touch places in Balochistan and Sindh by late May, will be prevalent in first 15 days of June. Monsoon advances into Central India and North India between 20th - 30th June onwards. Monsoon moves into Pakistan in 2nd week of July. 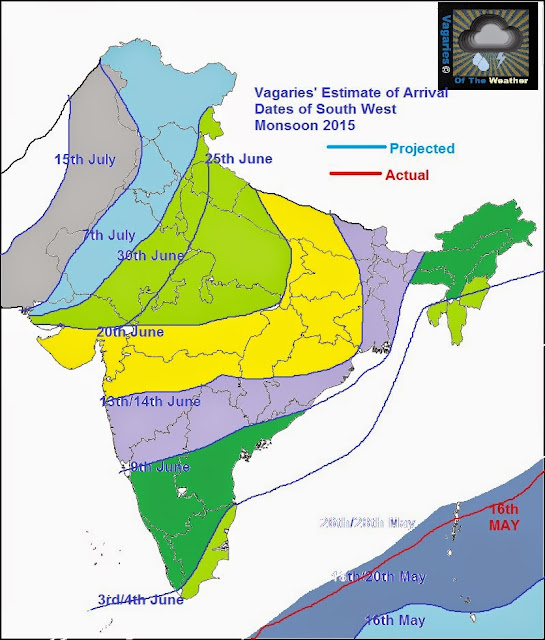 This estimate is based absolutely on the situation as it shows and stands today.
Things, if and when they change (drastically) will be posted and Vagaries readers will be kept well informed, of any variation in the forecast.
These are my personal views, and should not be depended upon commercially or otherwise. They may differ from other models.

Sir when will monsoon set in raigad district if Mumbai is on 14 june.When will pre monsoon rains start in raigad