Nagpur and Raipur can get thunder showers on Monday. Cloudy and cooler, the showers may accumulate around 25 mms in the day.Rains decreasing from Tuesday.

Delhi gets showers in some parts from 13th night or 14th.

Caution: The WD moves with a trough in the 30N , and could inter act with Hudhud (as a Depression or Well Marked Low). Hence, heavy falls likely in Utterakhand and Western Nepal on 14th. Landslides likely in the region. 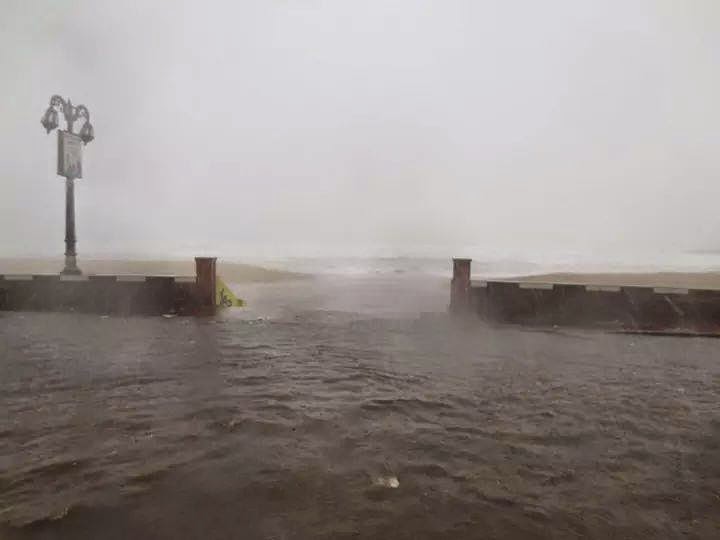 puri beach today..due to cyclone hudhud the waves had becomed monsterious from yeaterday ni8 and this ia the view of today when the sea water came into the road.....sent by Vagarian Mitan from Bhubaneshwar 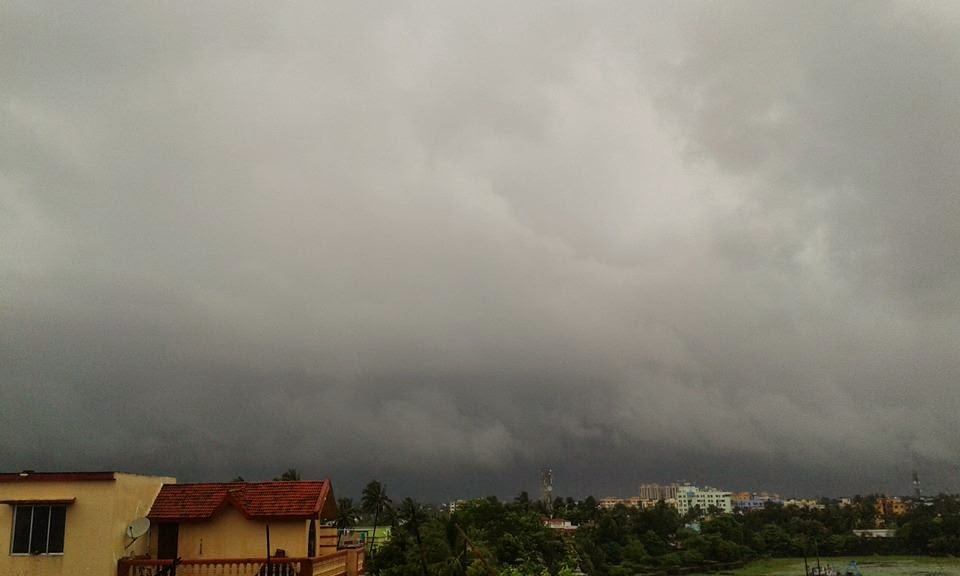 Destruction maximum in city of Vizag...City without power and in shambles...other half of Cyclone yet to cross..and along North AP coast...

Severe Cyclone Hudhud, now centerd just approximately 60 kms ESE of Visakhapatnam, is slowly tracking towards land. Even though still at Cat 3 and having devastating winds at estimated 112 knts, 203 kmph, with gusts at 135 knts,  a damaging 250 kmph,,, it is fortunate that the storm has not strengthened more.

On initial landfall, around noon on Sunday, few pockets can get rainfall in excess of 150-175 mms.

With core pressure estimated at 945 mbar, the eye of the storm seems to be ( as seen in image)  "opening into irregularity" before hitting land.

As the centre is 50 kms away, the Western alf of the system has already crossed land, and the effect in terms of heavy rains and winds is seen along North AP coast. Kalingapatnam recorded 117 mms till 8.30 am Sunday and Vizag 105 mms with winds at around 50 km/hr.


At the current speed of tracking, the centre would cross land around noon Sunday.
From Sunday evening, tracking towards interior AP, South Odisha, then Chattisgarh and through Eastern Vidarbh into East MP...
By Rajesh at October 12, 2014

SWM was deficient in entire AP. Even now as NEM eludes, Rayalseema temperatures have soared to 38deg. Cyclone in AP/Orissa boarder however did not produce huge rains - like 300-400mm range (recent lows over NW India gave huge rains to over come deficiency in few spells)- however HUDHUD gave only max 100-150mm range. Hope it gives more rain to coastal AP rather than windy destruction.

SSET wait for Tomorrow. The rain figures are mind blowing.

Gaurav gave this on face book:INCREDIBLE INDIA:
Three totally different colours of Indian climate at same time...
In north winter is already registered its presence with snow fall and decrease in minimum temperature....
In South East facing worst scenario with severe cyclone and extreme raining....
In west mercury is exited to touch 40c (real feel may be 42 or more)....
Really......INCREDIBLE INDIA..... — feeling hot.

sure Pradeep - as of now we are waiting for NEM to arrive at TN/Rayalseema/Sri Lanka - 4 years of successive failure spells ecological disaster - u are expert for southern regions. By the way Hyderabad (450mm only since june) has not received any rain from HudHud cyclone - same with entire Telangana/Rayalseema - would have been good if strike would have been at TN/Rayalseema. What is your opinion with NEM?