Vagaries will not be updated next few days as I will be travelling with very limited time and facility to write..next Update on Saturday 7th December... 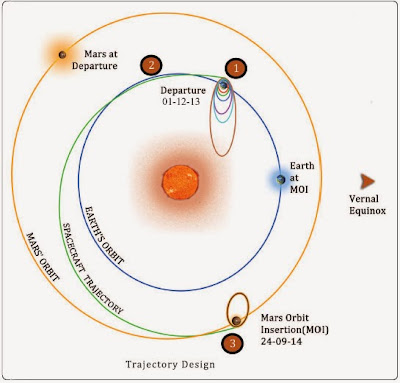 Trans Mars Injection (TMI), carried out on Dec 01, 2013 at 00:49 hrs (IST) has moved the spacecraft in the Mars Transfer Trajectory (MTT). With TMI the Earth orbiting phase of the spacecraft ended and the spacecraft is now on a course to encounter Mars after a journey of about 10 months around the Sun. Credit: ISRO

The Trans Mars Insertion (TMI) firing propelled India’s Mars Orbiter Mission (MOM) away from Earth forever and placed the spacecraft on course for a rendezvous with the Red Planet on September 24, 2014 – where it will study the atmosphere and sniff for signals of methane.

Both MAVEN and MOM’s goal is to study the Martian atmosphere, unlock the mysteries of its current atmosphere and determine how, why and when the atmosphere and liquid water was lost – and how this transformed Mars climate into its cold, desiccated state of today.

India’s MOM – ‘Mangalyaan’ mission is expected to continue gathering measurements at the Red Planet for at least six months and hopefully much longer.

MAVEN could operate for a decade or longer and is also crucial for relaying images and data collected by NASA’s current and upcoming surface rovers and landers.

Although they were developed independently and have different suites of scientific instruments, the MAVEN and MOM science teams will “work together” to unlock the secrets of Mars atmosphere and climate history, MAVEN’s top scientist told Universe Today.

“We have had some discussions with their science team, and there are some overlapping objectives,” Bruce Jakosky told me. Jakosky is MAVEN’s principal Investigator from the University of Colorado at Boulder.

“At the point where we [MAVEN and MOM] are both in orbit collecting data we do plan to collaborate and work together with the data jointly,” Jakosky said.
By Rajesh at December 02, 2013

makes us very proud. India is one of very few (less than 5 I guess) countries with independent space program. Bravo!

Seems heavy rain over pune???? some of the blogs say low over SE Bay may curve towards Burma/WB/Bangladesh - then this will turn out to be again disaster for TN drought? At this point of time whenever it rains at places other than TN/SE India - it sends panic situations.

kudos to ISRO for successfully launching the mars orbiter..Hopefully it will complete its mission as desired

Been to port canaveral florida few years back lovely place.

Sir how will weather around Alibaug this week end?

Vishal: Alibag will be sunny, but very pleasant winds in the day..expec around 29c in the day, so maybe warm in the sun, but windy evenings around 21c as minimum...(for this week end)

Colaba(Mumbai)recorded 0.5mm rainfall ending 8.30am today. In morning around 6.30am it was having rain !

Whole coastal stretch from Colaba to Dapoli just off shore in sea had the rains as per radar !

I am currently at Vapi, it's very hot and humid here. Typical weather for a thunderstorm later in the evening.

I am currently in Vapi, very hot and humid here, feels like the month of May, had it been Summer I would have bet for an evening thunderstorm today. I am nice and comfortable in a AC conference room.