Idol of Lord Hanuman submerged under water due to heavy floods at Ramkund near Panchavati area in Nashik. Large areas of Nashik experienced worst flooding after heavy rainfall since last two days which pushed Godavari River beyond its banks. The torrential rains have also increased the water level in the Gangapur dam with the authorities being forced to release extra water from the dam. Photo: Prashant Kharote Helvetica , Lokmat Times 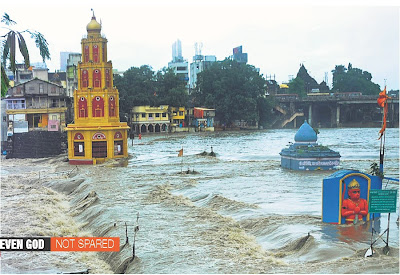 Plenty of heavy Rains in Vidarbh and Marathwada. BB-8 precipitation thru these regions with vengance.

BB-8 now stagnating over MP (996 mb), but expected to move West and weaken further.Trough from the system currently runs Southwards down perpandicular thru Central Peninsual. Can slant SE wards as system moves West.
Rainfall now moving into Gujarat. districts mentioned in yesterday's post will be affected. Sindh can get rains from Thursday night and Friday as forecasted.

Mumbai will get constant rains on Thursday night. Decrease from Friday.

North regions not mentioned in blog as concentrating on BB-8 effect only.
By the way, Kangra AP measured 126 mms in the same period.

Below Compilation from Rohit Aroskar: 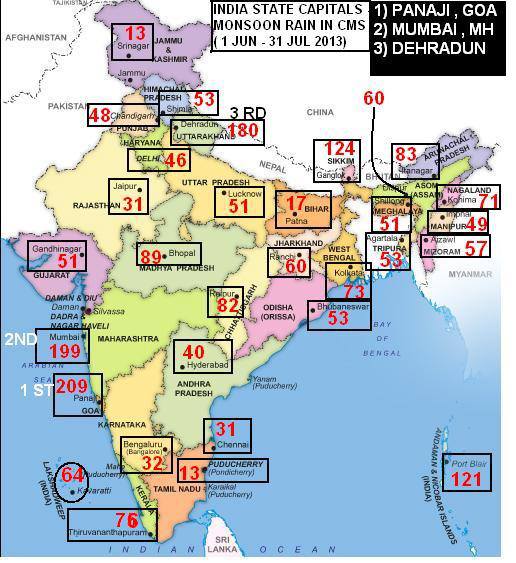 Good Analysis of Goa Rains from Atul here
By Rajesh at August 01, 2013

Times of India today quotes RMC Mumbai:" Depression is the first stage towards formation of a low "---" A circulation forming within a trough competes with the low temperatures in neighbouring areas"---What does that mean ?
And they say Heavy rains expected in Vidharbh,,are they not over ?

ToI, we expect better quality from this papaer.

Haha.. What kind of a statement is it? TOI definitely misinterpreted like The Hitavada did. The Hitavada claimed and boldly titled Wednesday's Nagpur rains as "Cloudburst" - http://www.ehitavada.com/site.home/paper_type/13/date/2013-08-01/page_no/1

This created a panic among the people and they are asking me whether it was cloudburst or not.

Tarun Bharat is the only newspaper which critically analysed this issue instead of writing such things.

Akshay: and depression is 1st stage of Low ? What about that statement in ToI ?

They must verify their language before publishing from some weather expert. Majority of the people don't bother to understand what the reason behind any rain/thunder event is and they simply don't point out such errors like we do. Newspaper people take advantage of this situation and add "Masalas"

Think Mumbai already pounded overbite and it will continue thru Friday. Panvel taking a very bad hit presently as I write, nonstop moderate from 10pm intensifying at 0530.

Why don't we see any pressure drops below 1000mb over southern India - what factors make this happen and extreme rains for interiors? This factor always seen over MAHA,GUJ,MP?
After Kolar districs,Hassan districts face drought as monsoon eludes entire interior/central KAR. AP Rayalseema districs follow same. This is 3rd time in year this is noticed -probably weather scientists should do some research and warn against the approaching extreme aridity.

Water falls like rain for past 40 hours over Navi Mumbai/Mumbai. It would have crossed 150mm..Mumbai lakes continue to overflow..Tansa overflows for 2nd time in 2 months. Is Vidarbha next Konkan?

Rajeshbhai, newspapers and general media is highly ignorant while reporting many specialist events. Professional reporting barring few exceptions sorely is lacking. In the West, journalists go through rigorous training in the specialist fields like wildlife, war, disaster relief, third world economy etc before writing on respective subjects. Journalists are specialists in their field while reporting for reputed publications. Last time, Indian Express reported "Flamingo from Australia" with the photographs of an egret!! They routinely mix up defence ranks, bird species, and weather terminologies. Written word is no more sacrosanct !! In fact exaggeration is the common disease !! ... Potey