Same position as the morning 5.30 am IST ….. The off shore vortex is stagnant around the S.Konkan region as per the 1200 hrs Charts..

The upper air trough is persistently remaining in the “horizontal” position, and extends from the mid Arabian Sea UAC  towards the vortex. Clouding seen is around the mid sea UAC and along the S.Konkan coast.

It seems from the current conditions, that the UAC will dissolve, and the vortex will strengthen. It will possibly move a bit Northwards towards Central Konkan region  by Sunday.

In this circumstances, I could hold on to my Sunday forecast for Mumbai. Expecting around 65-85 mms in Mumbai (average) on Sunday. . By Sunday, with the vortex, the SWM could move Northwards towards Mumbai.
Peak vortex location could get in excess of 150 mms on Sunday (Central and S.Konkan).

On Sunday, we could see the off shore trough extending from Saurashtra to Kerala. Hence rains along the Gujarat coast and Saurashtra would be prominent on Sunday Night/Monday

As the vortex persists in the S.Konkan region, and the OLR not yet going below the 200 count, I would maintain the SWM at the same position as shown in the vagaries map (at S.Konkan).

A trough in the 500-700 hpa region  can form from the heat low over NW India. It could possibly form around the 14th/15th of June. This will be of extra benefit, as it will attract and pull moisture from the Arabian Sea into the NWI regions thru Gujarat.
As this will be a low covering a fairly large area, from 14th/15th June, we could see the moisture flowing into Southern and Central Pakistan region also.

The low in the upper regions will also attract the Easterly winds into Northern and NE India, from the Bay of Bengal.

Later, maybe after the 15th  June, as a result of the inter action of the Easterlies and SW winds from the Arabian Sea, we could see the SWM progressing into UP and then into Delhi NCR.


More on this later, as I do not take credit of Long Term Forecasting… 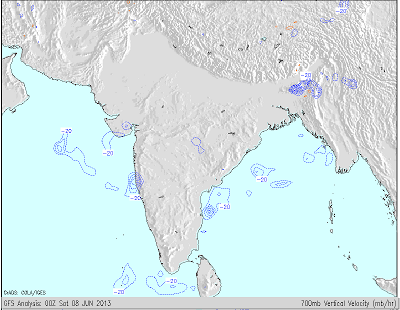 Vagaries expects the vortex to get embedded in the off shore trough..more as it happens !

Posted @11.30 pm Friday: A trough is getting stabilised at the 700 hpa level off the west coast of India. As anticipated earlier, the likelihood of an embedded vortex in the trough remains a possibility. Studying the wind shear and other factors, it seems the vortex can form as early as Sunday.

The vortex, in all probability, can form anywhere between Dahanu and Goa on the west coast. The region and area of vortex may be small. But, we can expect  >100 mms of rain on Sunday, or when the vortex forms.

I think in south konkan places like Ratnagiri, Harnai could get more than 200 mm rain for next 48 hours. And Mumbai might get over 80 mm of rain on sunday and monday combined.

Till last year MCGM maintained this site (http://mumbaimonsoon.in/) with hourly updates of automatic rain gauges across Greater Mumbai. Now it shows the domain name expired on June 01 :|. How lazy is the municipal corporation! Any other source of getting these updates?

So moderate amounts of rain received ..

Has Vortex formrd yet Rajesh? It seems it will form around ratnagiri and then move north towards Mumbai. Latest forecast model shows total of over 100 mm rain for Mumbai on sunday and monday. But ofcourse this forecast can change.

As mentioned by Rajesh sir, just a while ago the vortex has formed & as it makes its move towards Mumbai the rains likely to become more heavier and prolonged.

Super darkness engulfs Navi Mumbai - seems rain gods will unleash all anger! Wondering if start is like this- what will happen in next few months?

Mumbai Doppler radar is now back to life. Have fun watching all the rains in and around Mumbai on the Radar

The offshore trough and the NW-E across the plains are in place. The heat wave, seasonal low, LWD have done their bit. And now the vortex! Is asking for more too much?

as published by IMD just now - Thane Belapur - 140mm yesterday!! Guess it should be more as it was raining non-stop since afternoon - cold and dark. IMD monsoon on way to GUJARAT!! Too soon. By the way we see dense mass of clouds all prepared to hit Surashtra/Kutch?

IMD in it's current bulletin has declared Monsoon over Mumbai, the Monsoon NLM now passes through Mumbai.

Sset your take on Navi Mumbai is welcome. But don't discount the other heavens around Mumbai. Like Thane, where I stay for example. You are welcome to the planned godhbundar road area and see for yourself the greenery adjoining the SGNP. Also Thane is a well planned city like Navi Mumbai especially along the arterial belt from check naka to ovla on godhbundar road. You should have joined us in the April meeting to appreciate that. But anyways we will recommend to Rajesh sir to hold our next meeting at Navi Mumbai.

Heavy downpour with gust of wind from 4.15 pm after an overcast day at Magao Goa

No signs of rain today here in western suburbs.

Abijitji you are right thane area is very beautiful (recently I had been to essel world via Gorbhunder road - mountains,creeks,forests).

It is steady downpour in panvel since 2-3 am.

3.am heavy showers in Vasai, now cloudy and breezy.

Badlapur having just drizzling from 3am onward. @ SSET I am from Badlapur having beautiful Matheran mountain range running from Badlapur to Karjat in West direction. So in monsoon Kondeshwar waterfalls are famous one day picnic point here. And GSB sir is from Thane who stays at Ghodbunder and he requested you to visit an planned city Thane.

vagaries manages 32 mms from mid night to 9.30 am Sunday

It's pouring in Vasai, for last 10 mins.

latest update->very heavy rain at Mumbai for past 15-30 minutes with very low visibility..

1) Off shore trough at sea levels and /or lower levels (925 hpa)
2) Cyclonic circulation at 700 mb /500 mb(mid-troposphere) off the coast
3) Westward /NW moving Low /depressions from the bay
4)Formation of a sympathy low along west coast in the off shore trough along with the above mentioned bay low..
5) Strong wind shear (cyclonic) in the westerlies along the coast at lower levels
6) A good pressure gradient along the west coast

And Abhijit I think SSET is very fond of you. Haha ,so now I am sure the next meeting you two should arrange either in Badlapur or Navi Mumbai.

Weather has become cool and pleasant ,as rains continue in Mumbai, Vasai and surrounding's.

IMD puts red alert over MAHA,GUJ,RAJ(extremely heavy rain for next few days). GUJ/RAJ are lucky gap between WD and SWM was too less are benefited by both. Meanwhile entire southern penisular India shows no cloud cover - indicating rapid axis shift towards north/central India.

sset, which IMD do you refer to? Is it a figment of your imagination? Red Alert - Where has that come from? No part of India is under 'red alert'. Only South Rajasthan is under yellow alert (lowest threat); Other parts of Rajasthan are under 'heatwave' and even Konkan or Gujarat is under 'Orange alert'

And what is the point of your constant comparison between Coastal Maharashtra/Gujarat and South Interior Peninsula? It is as pointless as comparing Cherrapunji with Mumbai.

Rajesh Sir,
The way it rained today since morning I taught we would be close to 150mm.