Vagaries Estimate for October Weather for the Sub-Continent:

As we see the SWM still prevailing in the Indian peninsula and Eastern regions, we shall first discuss its possible retreat.

The current signs and parameters suggest a withdrawal of the SWM from and A.P, and Orissa by the 1st week of October.

Further withdrawal from the Southern states of Karnataka, T.N. and Kerala will be between 7th and 12th October.

Formations of UACs or a low pressure in the around 16th can herald the advance of the NEM. Initially, as a weak MJO prevails in the , NEM may remain weak till the 22nd.

ENSO conditions remain within neutral conditions, but both atmospheric and oceanic indicators show a trend toward La Niña. More importantly, for a La Niña event to occur, these indicators must remain above the threshold and persist for at least a few months.

Hence, NEM could be moderate to average after setting thru October.

No major W.D. is seen crossing the Northern regions in the first half of October. However, as the westerly upper winds gain strength and stabilise, a W.D. is possible in the second half of the month. The middle hills (Gulmarg, Pahalgam, Kalpa, Keylong) could get the first snowfall during the 2nd half of this month, and here will see the temperature touch 0c by the 15th of October. Leh, in Ladhak will freeze a week before.

Northern plains of , , and Rajasthan will be hot in the day. Day temperatures in these areas will hover between the 32-37c range till the 15th October. Cooling will take effect in the 2nd half.

Days will be around 33-35c in interior cities till around 18th October.

There could be a possibility of a depression forming, and strengthening, in the East Arabian Sea off the west coast of around the 20th of October. This is based on certain assumptions, and such long time predictions could change.

For , the surface winds have almost become westerly to NW. Indicative of SWM withdrawal. SWM still holds sway in the central and Eastern parts, but likely to retreat by the 1st week.

Local weather phenomena always holds the key over the Mountainous areas, which in turn effects the nearby plains. Thunder cells could form in the mountains, and drift over the nearest plains areas. Specially in the next few days, as the region is predominantly saturated with moisture.

In general, we can expect the nights in to get cooler after the 10th, will start dropping to around 14/15c and gradually go lower.Presently at around 17c.

The average rain for for in October is around 57 mms, and most of it could be from local phenomena, meaning no W.D.systems etc.Do not expect any W.D. to have any great effect in October.

Sindh regions of will initially heat up in the first half of October. The days will be in the 35-39c range in many cities of Sindh, with cooler nights dipping to around 18/19c in the interiors. Days will drop to below 34c after mid October.

Northern regions will experience the normal cooling, with a couple of W.D.s in the Northern most regions preicipitating rains, after 20th of this month.

Reader's views and suggestions most welcome.

These estimates are my personal views, and should not be depended upon for commercial uses.

As I said earlier Mumbai will get surplus rain in october & november imho. But only you can predict things like depression off west coast around 20th october. I hope u get this right, it will help to keep things cool in Mumbai.

Actually NOAA is already calling the current even La Nina. According to their predictions, the even will develop further, reaching the peak around Dec-Jan. Lets see how it unfolds.

moonsoon withdrawal seems to be stuck at the borders of mumbai for the next one week atleast ..???

On What parameters have you prepared this forecast?

svt: Trying ! Your expectations for September was also over rated..(450 mms if i remember), so you never know !
Neeraj: In fact last week the SST rose marginally, and still neutral conditions hold on.
Akshay:Stage by stage,before each forecast, the parameter is mentioned. Whether they are the withdrawal parameters, or the upper winds, or the MJO or a W.D. Each has been mentioned in brief. Vagaries never goes deep into the technicalities.
This is a common man's blog. Details may be "out of bounds" for me too !

What about NE monsoon over south India???? Here people are stating about extended SW monsoon till november. My view Maharashtra / Mumbai requires no more rain- we wish to see sunny spells. Already all lakes full - no problem till next year. Bye for rains - but south requires extreme heat places over TN still 40degress!!

Rajesh - we see huge spiral mass below 0 degress latitude - below SriLanka. This will move in which direction? (a) North - up - which will be good for sri lanka and TN (b)east and then North - Then Mumbai is in for big problem - again rains (c) east - then probably this will hit Africa.

Yup, I got my september forecast all wrong. I expected 400mm. From now on will never predict monthly forecast numberwise. I am not good enough to do that. And I was praising you for such bold prediction, not many can do this. I just hope we get atleast 3-4 rainy days in october. :)

drizzles in thane after nearly 10 days.....monsoon withdrawal in next couple of days..???

Today's Maharashtra Times (on front page) reporting that Mulund yesterday got heavy rain around 11:30 am. Gavanpada in Mulund got 27mm whereas Mulund west got just 6mm yesterday.

SSET said:
we see huge spiral mass below 0 degress latitude - below SriLanka. This will move in which direction? (a) North - up - which will be good for sri lanka and TN (b)east and then North
************************************clouds will move from SW to NEly direction only. The SWM 2011 has yet to withdraw from Central India. Rapid withdrawal along with simultaneous on set may take place. TS activity in interior parts of TN moving from NW to SE is seen. Probably the withdrawal may come soon to this latitude.

Shri. Rajesh: 20 days prediction [i.e 20x24 HRS=480 hrs] is unimaginable.
Similarly meteorological parameters [statistically enumerated], and certain tele-connections which are otherwise believed factors for the on set of NEM (or any monsoon)may NOT hold good all the time. As pointed out somewhere, it is the STUDY OF WIND REGIME which may through further light to understand weather in better perspectives.

sset: The forecast for the system in the Arabian Sea is estimated on the falling in piece of certain parameters.Like abnormal heating due to absence of W.Ds and formation of a ridge over Northern and Central India.
It all depends,I could go wrong,but have put up what is probable. 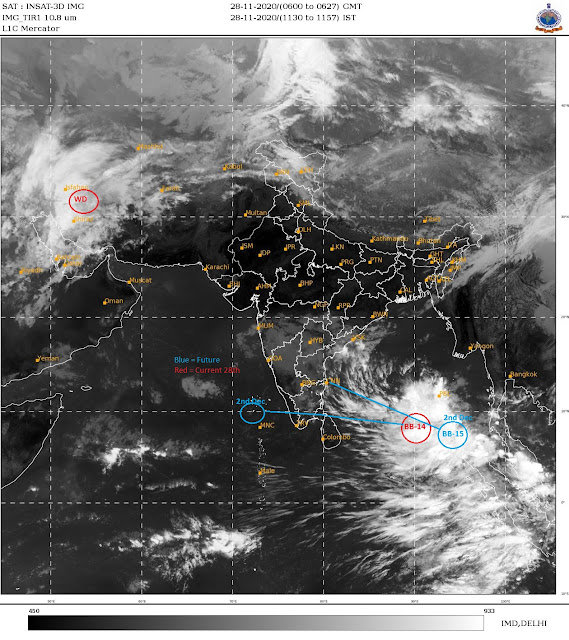