South West Monsoon ...How Vagaries works out the Withdrawal...(18th September 2016)

South West Monsoon Criteria for Withdrawal as per IMD:
Withdrawal of SW Monsoon

b) After 1st September:

a)*A Primary factor  is the 200 hp jet stream. This is one of the main and assertive parameter. The Easterly winds at 200 hp, gradually become Westerly starting from the Northern regions as the Monsoon withdrawal line moves South.An anticyclone High forms in the jet streams around the Sindh coast by 1st week of September, thereby creating Westerly winds almost throughout the region of Pakistan and Rajasthan. In fact, these winds bring down the axis and the withdrawal line.

b)**As the Monsoon withdrawal commences, the seasonal Low weakens, and the core (then becoming around 1000 mb during initial withdrawal ) moves to North Pakistan region.

c) Another factor, connected is the Outgoing Longwave Radiation (OLR). As the norms touch 290 W/m2 or rise above ...

d)***Also, the Upper Troposphere Humidity plays an important part in supporting and "holding " the Monsoon. The current humidity position indicates a weak situation for Monsoon sustenance in North/North-West.(Below 10%).

* The West winds (at 200 level) are firmly above the 30N line. An Anti Cyclone will form along the 27N line, roughly in the Sindh/Rajasthan region in a couple of days.Jet Streams North of the Anti Cyclone will be firmly West.

**The Seasonal Low is weakening, with the core around the Central Sindh Region at 1002 mb. Will move and merge with the other Low in North Pakistan, also at 1002 mb.

***OLR and UTH Map shows the immediate withdrawal possible from Rajasthan and Punjab.( From 19th as mentioned in yesterday's Post). 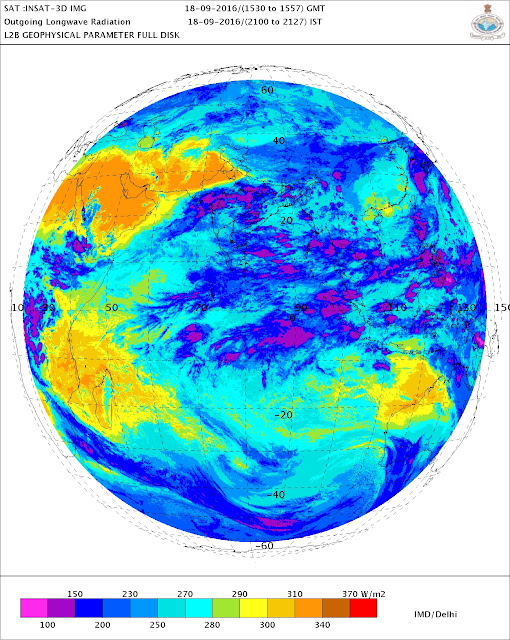 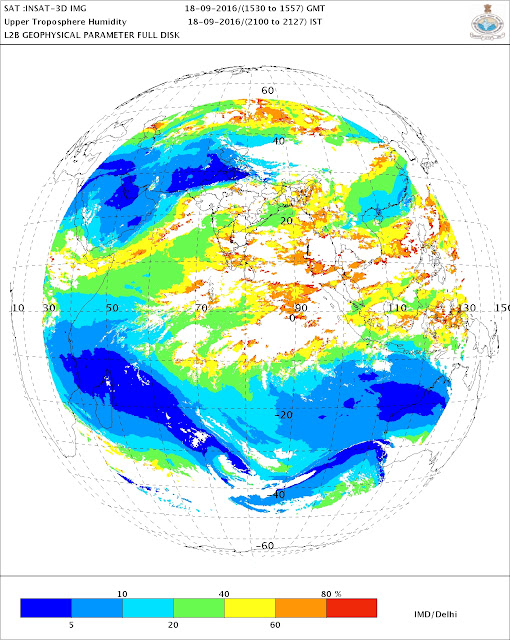 At the 850 level, a weak anti Cyclones prevails over NW India and adjoining Regions. But conditions are apt for a Ridge formation over the Region in next 2 days.

Mumbai received 72 mms and Scruz 65 mms in the 24 hrs ended 12 mid night Sunday. Vagaries had estimated 60-80 mms in this period yesterday....No connection with above article :-)

Raining heavy to moderate here in Mira Road,North Mumbai since past 90 minutes.

Raining heavily in Andheri as well

Raining heavily all over Mumbai- city and western suburbs since 10.30 AM

Raining heavily since Morning in Goregaon

Looks like no end for MAHA rains - pouring buckets seems MAHA is bent on capturing rains meant for southern india...

Heavy rain since morning and its continued

Still raining raining in most Mumbai.... When would rain ease in Mumbai

Heavy rains in Central Mumbai last 4-5 hours. All forecasters got it wrong last 4-5 days. Rained far less when 150-170 were forecast. Now when rain suppose to decrease its pouring. Rain Gods having last laugh. :)

When would rain ease in Mumbai

Yes all forecast went wrong this time...it's a surprise package.

With due respect to your views, yes, initially as far back as last Tuesday (13th) the forecast was given for heavy rains. The forecast for Thursday which was almost correct, and the delay in Friday rains was explained.The forecast for Saturday mid night- Sunday midnight put up in the previous 24 hrs was correct. And no forecast was made after Sunday evening due to the article.But, Vagaries had never mentioned rainfall as much as 300-400 mms in a day.Never thought it would occur.Not that i have never gone wrong, in fact more often than not weather forecasts, specially with rain amounts (which are rarely given by forecasters) go wrong.
I have taken your views in the right spirit and appreciate your observations. Keep giving feedbacks, it encourages me, yes, i mean it. Thanks .

Just a thought. At work, how many of us are able to meet our budget forecasts (Sales, purchase, ......) all the time ? Or for students, get the forecasted marks ? Impossible right ? So how is it possible to get a weather forecast right all the time ? That too when the blog itself is titled Vagaries. Please ponder, fellow readers of the blog.

Rajesh sir,Please give forecast in detail for next few days.mention mybplaces.Heavy rains whole day here in nagothane.You Are always right....I support you....

Atlast got some measurable rain in Valsad from evining, still light rain going on.Sir, waiting for your forecast? Hope, to have atleast a good rain before monsoon withdraws.

I know. Wasnt criticising you or anything. At least you didnt expected 400-600 mm rains as many global forecast were expecting. Just saying how difficult is is. Todays rain could go past 100mm in Santacruz, not seen any global forecast predicting this amount of rains. Caught everyone with surprise.

I am wondering how can KAR,KER government be silent - actually scientist should now look at climate change and risk encountered... because if this continues cities may close...

Wondering now axis has come down a bit still why no trough over south west coast?
Why so many UACs over MAHA konkan? even if they form they persist for weeks, but same over north AP vanishes in a day and comes to MAHA?

@sset : A thought for you. There is an old quote " Frequent complaints or whining on the same topic are like those dark grey clouds which gather thick but do not produce any rain ".

Still raining in santacruz nonstop. But now its moderate rain...

Serious climate change -> Dhanau/ Palghar received 500mm in 24hrs!!! What is happening to MAHARASHTRA?
Suresh -> I don't agree it is time for ISRO,IMD to wake up.
Entire south west/interiors/cauvery not a single drop in-spite of being september

Some more figures from Dahanu taluka :