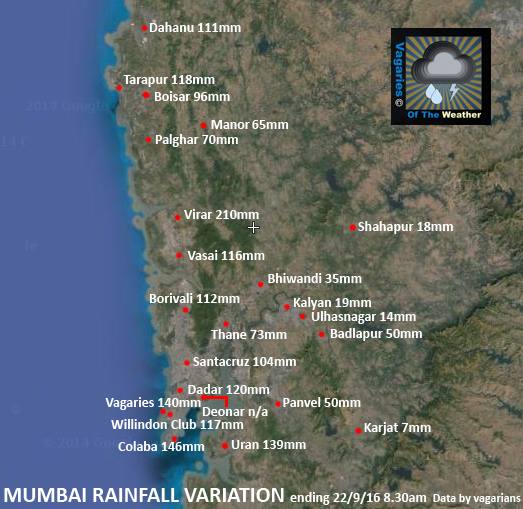 On Thursday, Mumbai city will get marginally less rains as experienced on Wednesday. Less frequency passing showers, not continuous,  will measure around 40-60 mms from Thursday Morning - Friday morning. (Less Compared with Wednesday figures).

Northern Outer townships have received the brunt of the heavy rains recently. They will get much reduced rainfall next 2 days.

Friday: Frequent showers, some heavy. Though not intermittent or continuous, the rainfall will be almost the same as Thursday amounts.

South West Monsoon may withdraw from Saurashtra by 24th September. 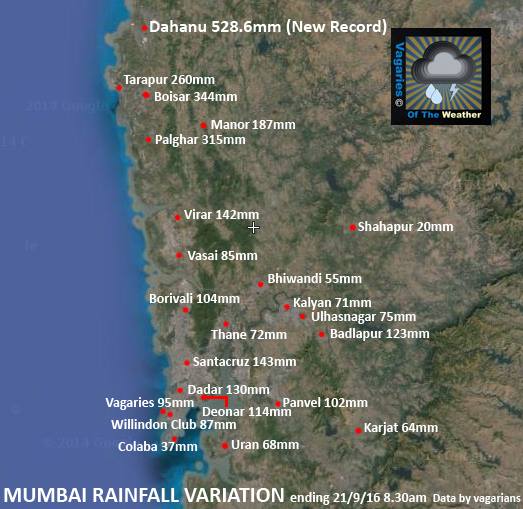 so quick release of figures - keep it up

Thanks Rajesh Sir for update - Till when is this activity likely to persist?.

so much of water for konkan - now time to link konkan rivers of Maharastra with coastal KAR and KERALA (no water)!

After 4pm raininh heavy to medium in santacruz...

Some body has blogged in kea...

GOD has forgot to close water TAP over MUMBAI/MAHARASHTRA!!!!!!

sir,awaiting for forecast for coiming days in this week.Will it rain heavy in mumbai?? rain has gone down here in mulund mumbai north east.Thanks.

Finally after two years of sub-800mm all India rainfall, today we crossed the 800mm mark !! Still there is a 5% deficit that need to be covered..with only 9 days to go for the official monsoon season to end it looks difficult that we will fill this deficit...

When is your next forecast.. It rained here heavily from 7 pm to 7 30 n whole day on off very heavy rained

This SWM in Mumbai and Maharashtra seems to be a classic all time best. The pattern, steadiness of the rain through the season with a dry spell in between has been wonderful to behold. Reminds me of the monsoon in the 70s. And as we go to the season close, it seems to be ending with a flourish. Nature at it's spectacular best !!

Got smile on my face while reading GSB sir comment/ ovservation that we are crossing 800 mms after 2 years albeit rare possibility season won't be able to wipe off current defect till 30.09.2016 the official date for closure of season irrespective of fact whether monsoon has withdrawn or not.

GSB this calculation is totally wrong...
Major contribution to this rain is Maharashtra and central India....
Southern India totally deficit so how come we can say all India average... results are skewed.

@ sset, IMD measures rainfall all over the country as a whole and average is worked out on the basis of the same. It might happen surplus of one state gets distributed to other state or districts deficit or deficits of other get compensated by surpluses of another district or states. I guess it's law of averages- simle mathematics at work. Even if results are skewed it will be taken as normal monsoon as a whole. GSB sir has been absolutely right on his observation as per standards set by IMD.

Much is being made of a deficit in Southern India for the past few years in the comments section...so lets analyse this with facts, and not some rhetoric based on a globally ill defined and very confusing concept of "Global Warming",environmental destruction/degradation and reduction of tree cover etc.

I have taken rainfall figures from the Indian Institute of Tropical Meteorology starting from the year 1871 (upto 2014)...and to focus on the southern peninsula figures we look at their "Peninsular" numbers under the All India and Macro Regional data set. (It includes six subdivisions namely Coastal Andhra Pradesh, Rayalseema, TN & Pondicherry, Coastal AP ,S I Karnataka and Kerala - all the areas presently underperforming in this monsoon)

I am just summarizing here (I will present detailed analysis,including NEM figures, on the main blog later);

Now before we get excited here are a few more facts...

But, and here comes the shocking part...NINE of the TEN WORST YEARS IN PENINSULAR INDIA WERE BEFORE 1972...!!!!!

Of the BEST YEARS too six were in the 20th century and three in the Nineteenth century..

So what so we make of this? There is nothing in the data which shows that Peninsular India is getting deficient rainfall..the best and worst years are all in the 20th century (except two..2007 and 2002).

Data for 2015 has not been updated by the Institute..I don't think one year in 144 years will make any difference..

So in conclusion the All India Rainfall numbers have their relevance...the monsoon does not look at borders or political decisions..and the fact that it has hovered around this 850 to 900mm number from June to September for almost one and a half centuries (surprisingly almost the same time period is used by the Global Warming community for their data).

It rain like madly in Mira road from 5am to 7am ...with lots of thunder n lightening.

Heavy downpour flooded the streets early in morning borivali west. GSB sir has been wonderful to quench the thirst of data lovers in this rainy season.

Excellent analysis , but i am sorry to say this will make no impact on SSET , he/she will continue to say the same thing , the best way to deal with him/her is to ignore him , by responding to him with facts , will encourage him/her to repeat the same thing over and over again .

Main culprit this SWM is when ever bay low used to form, same time UAC used to form either over konkan or south GUJ -> in fact this happened all 5 occasions leaving southern india completely dry.. what if this happens next year also?

GSB - statistically u are correct -- but for layman it is difficult to correlate such low rain in south with happy overall figures!

Sir, What is forecast for Nashik region? Yesterday east part of Nashik district recorded moderate to heavy rainfall. Any chances of rain in coming days?

soon Santa Cruz all set to cross 3000mm in a day or two, Colaba will follow like a loyal,faithful dog.....Mumbai many schools closed.

Operational forecast for the 2016 North-east monsoon season (October-December) rainfall over south Peninsula (Tamil Nadu, Coastal Andhra Pradesh, Rayalaseema, Kerala and south interior Karnataka) is most likely to be normal (90% -100% of LPA). The LPA of the North-east monsoon season rainfall over the south Peninsula for the base period 1951-2000 is 332.1mm.

Do you think rajesh sir,it will rain the same heavy in 72hrs?

Amidst all this, it is heartful to know that NEM is predicted to be normal for southern peninsula. I am getting a feeling that this will materialise and at the end of this year India will be having a good combo of SWM and NEM. I am positive that rain gods will support this prediction. Mumbai Maharashtra has been blessed this year with bountiful monsoon. But what about the water that is going waste in Arabian Sea. Such a huge waste of drinking water. Last 2 years were dreadful for Mumbai but this year has been such awesome that we will remember for years to come. I guess we approaching 500 mms for September. With this we may cross July rainfall figure in September. Hope that in this immediate round spread in more even in south India and west India read: Gujarat.

I think Thunderstorms are in store for Mumbai over the next 2 - 3 days. Looking at the satellite image it does look likely later tonight / early tomorrow morning. This is due to the approaching LPA. What say Rajeshbhai?

GSB, thanks for the wonderful data.
SSET is a disgrace to all weather lovers. He has already got substantial bad name to the blog.

Still onset of NEM is a big question... many parameters have to reverse.
New low is about to cross MAHA - another 1 week of torrentials falls for MAHA.
GFS shows central India rains till mid-oct...

And on other hand in same district on foothills of Western ghat places has received very less rainfall in same period !!

All above places has got mere 10% of Dahanu rainfall in 22 days period of Sep !!

So this is called as Vagaries of the weather

arjun/NT: Yes, after a day of almost no rain on Thursday, some rain at night could bring the 40-60 mms expected by us :-)