Low in Bay now lies at 15N and 91E...at 1002 mb and 25 knts winds at core.
The Map shows the dry air tring to "invade" from the SW of the system. The wind shear in the West and South of Low is likely to push the Low in a N/NE track, initially and then curving NE.
It will pull the SWM Northwards, and quickly bring it to the Myanmar coast up to 20N.

The effect of the system, to an extent, has advanced the SWM into the Maldives. Kadhdedhdhoo recorded 66 mms and Kadhoo 22 mms. Winds are expected to gust to 35
mph.

The rains over Goa and N.I. Karnataka, will last for 1 day more on Wednesday. The trough currently running from MP to the Arabian Sea runs thru South MP, South Mah and Goa.
This will shift to its normal perpendicular position from Thursday, and we see the rainfall pattern shifting Southwards towards S.Karnataka and Kerala.

Kolkata, will see the peak heating on Wednesday/Thursday. Maybe 42c....and then pre monsoon showers on 25th May.

From Thursday, the Sindh region of Pakistan starts heating up, and reaching 46c by friday 23rd, and 50c by May end. heat wave spreads to rest of Sindh and Balochistan.
Hot weather for 22nd in Gujarat and Rajasthan. Entire NW and North India in the 42-44c range, but going above 45c in UP and Rajasthan from 23rd/24th May.

Delhi NCR, will sizzle in a heat wave from Friday 23rd May...shooting up to 43c.
And Delhi will see rising temperatures at night starting from Wednesday morning registering around 29c/30c. 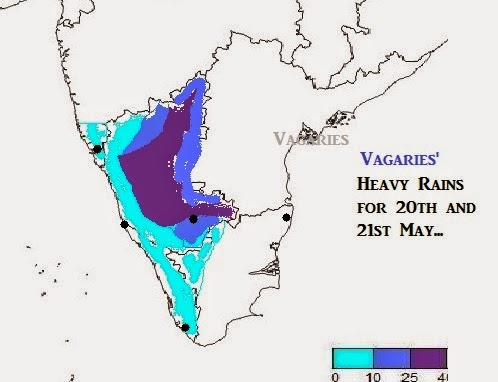 Vasai got sharp showers for 5 mins around 7.30 am today.

So atlast Vasai has started getting it's pre-monsoon shower's .

Sir, can upcoming WD later in this week halt heating in northern plains?

Rajesh sir when is this terribly hot and humid weather take a respite in kolkata and what is the rrason fo r this un usual record heat and absence of nor wester this season ? Kindly throw some light.

Anoop: next WD should be restricted to Northern Hills...Heat wave coming this week,

Wasim: Kolkata is hot no doubt. The persistent trough and horizontal trough position keeps the normal rains away from the region...expect the trough to become vertical, and pre monsoon showers from 25th or 26th..

Rained in bangalore last evening and night.
From 3:50 pm to 4:10 pm good rain in south bangalore. From 7.00 pm to midnight it was drilling.

Vijayanand: as per the forecast map, Blore is put just on the border of Dark blue and purple...11 mms in city and 23 mms today at AP
Pre monsoon showers to start from 27th..i feel

very hot in Kathmandu. Prolonged heat - daytime high in excess of 30C for the past two weeks, past 10 days it has 31 or above with the highest at 33 C. Though does not sound very hot compared to other parts of the subcontinent (with expected 50 C in Sind as per Rajesh sir), its hot for city not used to prolonged heat of this nature.