Karachi remains cloudy in the day..and Nawabshah after morning showers, has not gone over 21c on Monday, remaining cloudy...forecast tonite..


Snow in Shimla..Freezing cold wave conditions returned to Himachal Pradesh with the state's higher reaches and tribal areas receiving more snowfall and intermittent rains and sleet lashing the mid and lower hills.
lShimla experienced intermittent rains and snow, and the sky remained heavily overcast throughout the day as mercury dropped to 1.5c.The capital town received 6 cm of snow and eight mm of rains on Saturday and Sunday. The maximum day temperature was 8.5c.

Manali got 8 cms of snow, with the low at -3c.
Leh in Ladakh saw a low of -9c, Gulmarg -5.6c andPahalgam -4c.Evening rains in Hyderabad (India) on Sunday, forcing the last few races to be cancelled...Rain from the weak low shown in Sunday forecast chart on Friday's post below..
Vagarian's Field trip to Regional Meterological Centre(IMD), Mumbai on 21st February 2014. See Slide Show here
Permanant Link on Vagaries Meet in Pics Page And in Links on right side of Home Page.


Thunder and rain in Karachi since Monday morning...keeping the weather cool at 16c, almost at the overnight minimum level. 11 mms recorded at Airport till 03z Monday...more later 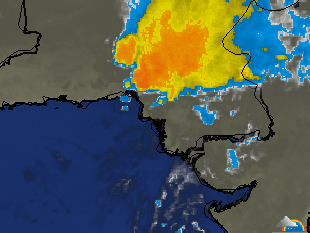 Mumbai Eastern Outer townships can expect clouds on Monday, with good chances of light rains in vicinity and in pockets around the ghat regions.

Cloudy Weather with light rain expected in Pune and Mahableshwar on Monday evening.

I posted from my phone this morning about the AM T.S in Karachi but surprisingly didnt come. Welcome rain.

Thunderclouds have formed in the eastern sky here at Vasai.

radar is showing some rain outside pune

Also Hail storm are reported from some places..