Details of Sub-Continent Precipitation put up on Vagaries Extreme Blog as records..

The huge effect of F-1 over Pakistan is seen from the high amounts of rain and snow..above 200 mms in some places.

List given by Wajahat in comments proves the point.A detailed list of record snow is also given in the PWP blog here. It mentions of Jeddah getting 111 mms !
F-1 effects on Dubai and Muscat have already been pictured on vagaries. 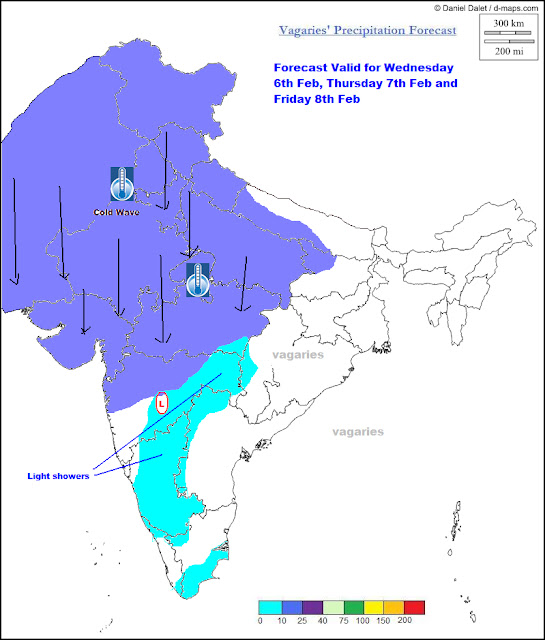 On 6th and 7th Feb,N and NW winds pick up in the entire region north of 20N line...hence cold wave in the marked regions.
In some parts of Rajasthan, Gujarat, Punjab, Haryana, MP and North Mah., night temperatures may dip by 5/6c from current levels.
Within Next 3 nights, likely to reach 7c in North Mah, Gujarat, 4c in Kutch and Rajasthan, Punjab and Haryana.

Cold coditions will cover Sindh and Northern plains of Pakistan. Nights will drop to 3c in Sindh and Balochistan plains, and 4/5c in Northern plains.
Karachi can drop to 11c, Hyderabad (Pak) will drop to 11c and Sukkur will go to 6c.
Kathmandu will get a shower on Wednesday, and then clear weather, Night will be 5c till Friday. Expect colder night on Saturday...

But, South Mah (Pune/Solapur and Vid ) may not get the full effect as a weak low forms over the region on the 6th and 7th.
Some isolated rains may occur in S.Mah(interior), Vidarbh (including Nagpur) and adjoining N.I.Karnataka (including Bangalore) and Vid next 2 days.

City Forecasts for Wed/Thursday and Friday: Next 3 days...weekend forecast will be put up later.

Pune will be partly cloudy from Thursday, and temperatures will remain in the 31 - 13c range. Light rain in some parts of vicinity on Thursday/Friday.

Surat: Clear, with North winds cooling down the day temperatures by 2c to around 27/28c.. Nights likely to go down to 13c.

Mumbai City: Clear skies and N/NW winds will be cold and dry. Wednesday and Thursday will see a drop in temperatures will be bringing down the range to 28/29c in the day and maybe 15c at night at Scruz.

Rajesh/Sam Khan-> My Apologies- I have still not received response.

Just 1.8 mm in Kathmandu. One more day of rain to go (my guess); lets see how much we get.

Delhi and Lucknow both got around 6 cms of rain. It would be higher in the hills.

Its a record breaking downpour in delhi,46mm such a lot of rain in 24 hrs.

Some are jumping to a conclusion of rain in North Konkan next week...may happen or not...before that,i suggest that we, as based in the sub continent region, first must study the regional possibilities. That is whether the favourable winds and conditions develop, with positive contour and trough formations..and then fix our estimate and possibilities..then, if we are wrong..vagaries of the weather :-)

Also looking like max temp will again rise
to around 33c from Saturday onwards
here !