Day temperatures fell to some record lows, and were as low as 7c in India and 6c in neighboring Pakistan. These are very unusual low day maximums, and 7c is most probably an all time low maximum for Amritsar.
New Delhi neared its all time day temperature low of 9c , when it bottomed to 9.7c (Palam) and 9.8c (SJung) on 2nd Jan...
nights too broke the zero level, and the outer townships of NCR went below freezing...Delhi went down to 1.9c. Narnaul in Haryana froze at -3c....daily reports are put up on this blog.

Frost was seen in Hindon and plains of Punjab.


Of-course, the extreme North Kashmir region also fell to below norma temperatures, with Darbuk falling to -34c, while on Monday morning (7th), Drass was at -27c and Kargil at -19c.
Dal Lake froze as Srinagar dropped to -5.4c on Saturday night. 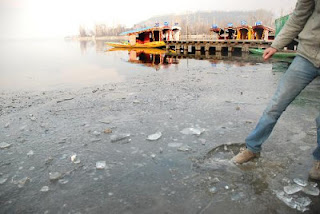 The last time North experienced such a cold day wave was in December 1973, when also an anti cyclone resulted in fog...see that report and current cold spell in the Vagaries Extreme blog.

Outlook for 7th, 8th and 9th January:
North:
As we see WD (J-1) approaching, it will reduce the cold impact over the plains of Northern India and Pakistan.
The plains were chilled, and the hills were sunny and had slightly higher temperatures all these days...now with J-1, coming into the region on 9th Jan, we see the hills getting cloudy and cold..precipitation will drop the temperatures in the hills.
A rise of 2/3c will be seen in the plains of Punjab, Haryana and UP...the extreme low days will rise from the bottom fiigures of 7c to 10c in the extreme.
A back to back WD is seen, with J-2 coming along around the 12th...

Similar weather Pakistan plains and hills of the North.

South:
Low pressure off the East of Sri Lanka has an associated UAC extending NW from it. Probably the last of the NEM...
Precipitation is expected in coastal TN South of Nagapattinum and in the interiors of TN South of 10N, that is South of Madurai.

Kathmandu, which went to -0.7c on Monday, will continue to see around 0c for the next 2/3 nights.

Mumbai:
Tuesday: Clear day with patchy fog and haze. Due to initial East breeze, in the pre noon, Day temperature around 31c (SCruz) and morning low will be 13c, and 17/18c at Colaba..
Wednesday: NE winds in the morning and NW by evening. Clear with a days high of 31c and morning low will be around 16c.
Thursday: NE winds keep the day at 31c, with the night at 15/16c.

Pune:
Tuesday/Wednesday: Days will be pleasant at 28/29c with East breeze and nights around 11c.
Thursday: With wind turning SE, and then NE, day will be around 31c, with nights at 12c.

Surat:
Tuesday/Wednesday: A marginal rise in day temperatures as wind turn East..to around 31c. The nights rising to 13/14c by Wednesday morning.
Thursday: Winds being NE, day remains at 30/31c.

can we study how 1973 panned out into summer, to get some clue reg. summer ?

Neeraj: Vagaries mentioned the temps around 0c next 2 nights...J-1 is out of question, for Kathmandu..J-2 also i would put 85% no chance. 15% i reserve in case the high pressure in N/C India gives away and lets J-2 dip...
But very good chances with J-3..expected around 17th-19th Jan..

Emkay: My theory is we can never compare only 1 parameter ans say that similar winter (1973) will bring similar summer. There are so many other factors which are different this year (from 1973), like 200 hp winds etc...
suggestion: dont waste time comparing ..or sit and compare each and every of the 20 parameters..

AN UAC formed over Orissa and the Southern Low pressure forms a twin off the Kerala Coast...posted Tuesday @ 2.45 pm

These low minimums combined with maximum temperature that are 9 to 12 degrees below normal makes it almost historic.

Saurabh/Arpit: The latest readings are put up in the "Flash Snippet" on the right side of page...

Rajeshbhai, Just returned from Delhi. I was there during the current spell. Kotla match was looking like match in Auckland!! 1.9 C night i happened to be out in NCR covered in three layers with parka ( Russian for overcoat) and days ..behold .. in similar cold with razor sharp breeze!! ...potey

Hello,
Will any of the upcoming western disturbances reach uttarakhand and cause precipitation/snow? I guess they are mostly consumed in J&K and HP.

Traditionally, the uttarayani festival (makar sakranti) period witnesses rain/snow in the mountains. It is supposed to fall around 14th Jan this year. I am trying to guesstimate if there will be any rain/snow at that time.

very low minimum temp here this morning. Probably lowest for the past 10-15 yrs; some sort of record maybe.

Prashant: i think chances of some scatterred precipitation from J-2 in Utterakhand...J-3 sure chance...where are you from ?

Neeraj: dipping to -2c (as per your report) is a good dip...will sustain around 0c for 2 more nights, after 14th, winds change to SE

As per IMD, the lowest minimum recorded in the plains was Gorakhpur, UP with -1 degree celcius. That is an all time low for that city.
Srinagar's minimum was slightly higher. That's a very rare occurrence. This is partly due to the fact that Srinagar had a above normal night due to the approaching western disturbance and the warming effect of that disturbance is yet to reach all parts of the plains.

So west coast turned warm again due to East winds..

Surat also not far behind as 33.6c max temp for today.

Saurabh: Yes, many other records were passed and beaten today..9th Jan in the East...new WD will cool the plains..
abhijit: yes, warming up more than expected...had anticipated upto 31c...but its crossing 33c