Today's SST map is reproduced here to show the Sea temperature falling sufficiently along the Somali coast. It is presently around 18/20c.

But the current drop is sufficient to help form Monsoon clouds around the Maldives. Cloud formation off Kerala is gathering, and in next 24 hrs, wind speed along the Sri Lanka coast is estimated at 40knts (in gusts).

A slight fall is seen in the Bay waters SST.

The Seasonal Low seems to have strengthened. We see today's pressure at 996 mb. Getting gradually ready enough to create a gradient  to pull up SW winds into the mainland.

The day temperatures on the Sub-Continent Northern plains are on the normal side from this week with the average the day's highs are around 40c. Currently the days have dropped to 5-7c below normal in North India...This is due to back to back Wds...M-4 and M-5.
Across in Pakistan' Sindh region, the core area for the formation of the low, the highest has already crossed 50c in Mid May.

WDs should slow down now, as the jet streams at 200 hpa are re-grouping fast into position. 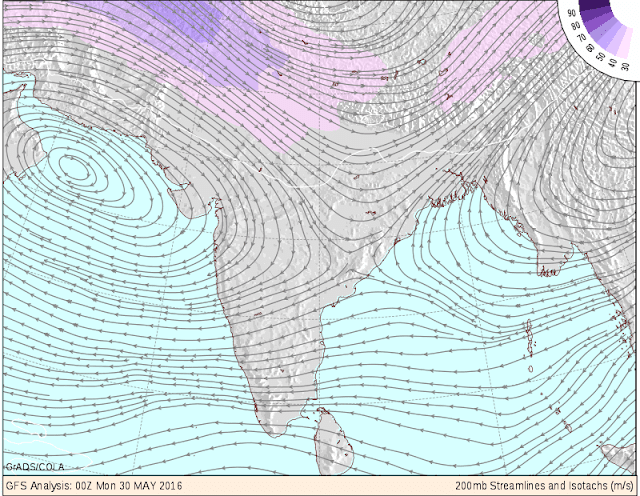 The Jet Stream Easterlies are almost upto the 19N line, and the "High" formation is taking shape in Arabian Sea. This Anti Cyclone will move Eastwards...Expected placement of this "High" should be inland towards Chattisgarh for perfect position.

The Bay sector SWM has been stagnant, and not picking up as expected from a "setting in" Monsoon.
In the next 3/4 days, SWM, could advance further into the Bay.

Changes in 850 hpa winds (anomaly) show a reviewed MJO pattern. Weak in our seas till mid June..and thereafter  going back to neutral as the wave moves Eastwards.

-SWM advance in to NE states by first week of June.

(This Monsoon chase is my personal view, and my personal analysis and deciphering is done as per my assumptions. Should not be used for commercial purposes).
By Rajesh at May 30, 2016

Well done sir :) sir dont u concider himaliyan/tibetan heat? Is it above normal or normal? The high over arb at upper level jet stream will move eastwards do the bob lows steer below this high? I mean this high can indicate the futurr steering of bob lows?

Meticulous work.... great to be a reader of VOW for such a wonderful work getting shared by you.

Over the years, I have seen whenever monsoon gets delayed the rainfall activity in bangalore-mysore-hassan-anantput-chitoor-dharmapuri-krishnagiri goes on overdrive.

So slight delay is good for us. But long delay is bad for everyone.

Rajesh sir,
Any chance of cyclone in cental arabian sea during onset..if cyclone form during onset it will be very harsh.
Rajesh sir condition is looking very bleak for west coast onset.ur view on that.

abizer: The models generally show a rain patch, or rain region, not normally cloud clusters. Rain patch around Mumbai is the pre monsoon thunder showers around 9th.
Moshin: Once the off shore trough forms off the west coast, things will not look bleak. As i said, thunder showers and pre monsoon rains start along west coast soon. See dates given in this article.

We may see an UAC or even a Low embedded in the trough, which may appear around the 8th of June. This will increase rain intensity, and pull Monsoon up along coast upto Saurahtra coast and parts of inland Saurashtra after 10th June.

Zohair: I normally consider Tibetan conditions (Like SE thunderstorms etc) before the Monsoon in April, and later the conditions after the Monsoon sets in and axis is over our region.
The High presuure at 200 hpa , as you correctly said, will guide and steer the course of depressions and deep depressions later. If the High (STR) is over the Northern Bay, then system move NE into Bangladesh or Myanmar.

We may see an UAC or even a Low embedded in the trough, which may appear around the 8th of June. This will increase rain intensity, and pull Monsoon up along coast upto Saurahtra coast and parts of inland Saurashtra after 10th June. This is not definite.

So sir, early chances of monsoon over Gujarat cost.

Sir, you mentioned about proper position of anticyclone/ high over chhattisgarh. Please clarify the things, as i didnot get it.

Nilesh: The "ideal" position ( in Monsoon months) for the Sub tropical Ridge (STR) that is the anticyclone in upper winds, would be over Chattisgarh. This would facilitate any system, coming in Monsoon months , from the Bay to track west inland. Would bring good rains to central India thru to Gujarat and Sindh.
The STR normally shifts East -west, and Eastwards shift would make any system in monsoon track NE.

Tibet temperatures are currently below normal by significant margin and are likely to be below normal in next 2 weeks specially the Himalaya regions, so ms advancement over nw india and adj central india is almost impossible in this time frame, and this pattern is normal, it would be abnormal if Tibet do not heat up in 3rd or 4 week of june

hmmmmmmm the best this of vagaries... pplz always here to answer the query load of thanks @sir Rajesh and @Kako Sehr

farooq: we have to see if the Low forms in the Arabian Sea trough. Only trough will not bring rains to Hyd Sindh. If Low forms, then we follow its path.