Sadly, the death toll throughout the Moore Ok area has risen to 91 this morning. Unfortunately, this number is likely to rise...Our Thoughts and Prayers are with you Oklahoma
A significant severe weather outbreak is possible across North and Central Texas later today, including the DFW Metroplex and Waco, Temple and Killeen areas...See International page for Detailed Warnings..from Echo Storm and US National Weather Service. 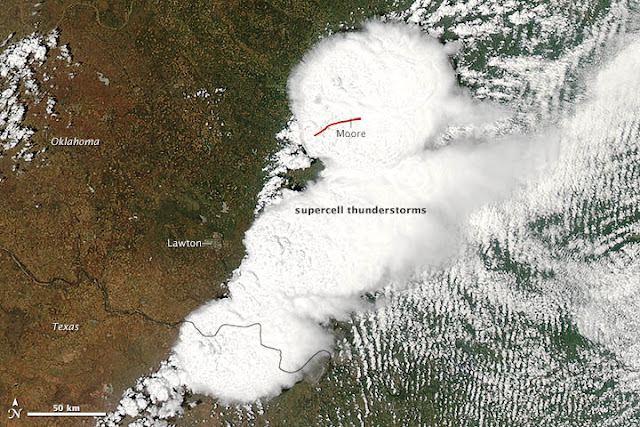 2.Tuesday, 21st onwards, Rainfall reduces from Maharashtra, from Tuesday itself.  Thunder showers reduce and almost decrease in South Konkan, Southern Mah. On Tuesday, isolated Thunder heads will be seen in the Eastern Skies of Pune.
Wednesday, 22nd, concentration of thunder showers in Tamil Nadu regions of Salem, Dharmapuri and West of Chennai. Some heavy thunder showers expected west of Chennai.

3.Nor'wester thunder squalls also retreat from Southern and Central W.Bengal. They will seem to have now concentrated in Southern Bangladesh.

4.From Wednesday, rainfall on the increase in Western Nepal.

5.On Thursday 23rd, rainfall from the regions of interior Karnataka and TN will see a major reduction.

6. Severe heat Waves with temperature in the 46-48c range in Rajasthan, UP, Parts of MP and Vidarbha Region of Mah. 48/50c likely in Parts of Balochistan and Sindh on Tuesday/Wednesday.
Vidarbha region will see a reduction in day temperatures from Wednesday by about 2c.

7.Monsoon Advancing in Maldives Regions and North of Andaman Islands in NE Bay.

First rains in Margao Goa since Jan 1, 2013. Thunder and lightening towards east and the Ghats. Light rains here since 9 pm. Overcast since morning. Probably rains widespread in Goa tonight.

light drizzled followed vigorous thunder and lightning at 4:30am to 5:00am in many parts of pune south southeastern pune
reports of rain from saswad jejuri and hills katraj

IMD has just announced SWM to hit Kerala on time !! First half of Monsoon to be heavier & normal.

Rajesh sir there was very light drizzle in Vasai, in the evening.i could figure it out on my car screen while driving .

It was a hot and clear skies day in bangalore.....really surprising that every model and rajesh sir predicted heavy rains today......

Would Nagpur touch 48 today an all time high.
Amit

Wind direction has changed in bangalore. Wind is coming in from west. Later today from south west as well.
First signs of the impending monsoon. Guess with this pre-monsoon rain season ends. Pre-monsoon rains come in from east or north east. Over the years I have noticed once wind direction sets to west from east, the pre-monsoon evening rains end.

From GEO news : May 21 (APP): The current heat wave conditions will continue in most parts of the country till end of the week and chances of thunderstorm with isolated rain are expected on Friday night or Saturday.

Talking to APP here, an official of Met Office told APP that heat wave conditions likely to continue in plain areas of the Punjab, Sindh and Balochistan during the next 24 hours.

Seasonal low lies over Balochistan and central parts of the country, Met Office reported adding, a shallow westerly wave is also prevailing over Kashmir and its adjoining areas.

In Khyber Pakhtunkhwa heat wave likely to continue in plain areas of the province during the next 24 hours. However, thunderstorm light rain is likely in Hazara division.

In Sindh and Balochistan heat wave conditions likely to continue in most parts of province during the next 24 hours.

While in Kashmir and Gilgit Baltistan, hot weather is expected in most parts.
,,,,Potey

chandan : I expect some very isolated showers on 24th/25th..not really widespread and in small patches..hit/miss for Belgaum...Then after 30th maybe