We see the day temperatures rising in Balochistan  and Sindh in Pakistan thru Rajasthan , Punjab, Haryana and Delhi into India.
Hot conditions likely in Gujarat, UP and Northern MP.

Day temperatures likely to reach 49/50c in Balochistan/Sindh regions of Pakistan.
Rajasthan, adjoining MP and Haryana will see 45/46c, with the odd 47c.

Depression BB-1, erstwhile Cyclone Mahasen will move away, and precipitate rains in Meghalaya and NE states as a depression .

The Line of Wind discontinuity, runs perfectly in the peninsula, from North Mah down South till Kerala.

Weekend will see moderate thundershowers in N.I.Karnataka.
S.I. Kanataka will get heavy thunder showers on all the forecasted days.
Particularly heavy rains are possible in the districts of Dakshin Karnataka, Hasan, Kodagu, Mandya, Tumkur and Bangalore.

Bangalore can expect heavy thunder showers and squall on the weekend.
On Sunday, a vortex may form in the trough, around S.I. Karnataka, hence I would expect heavy showers for Bangalore on Saturday, Sunday and Monday.

AN UAC is likely to form off the Kerala coast on Sunday, 19th. Could be located to the SW off the coast of Kerala.
Would sink to a sea level low (1006mb) on Monday.
As of today (Thursday), expected movement of Low is Westerly. Strengthening may be slow due to resisting High pressure to the North.

NE states would get heavy showers. Eastern Nepal will get weekend thunder showers  Kathmandu which got showers today, will heat by a couple of degrees on the weekend to reach 31/32c. But evening thunder showers are possible.

City Forecasts for the Weekend:

Mumbai (Scruz): Partly cloudy. Hot humid days and stuffy nights, Days will be around 33/34c and nights rising to 25/26c.
Outer townships getting hotter again, after a respite, days expected to touch 37/38c, but more humidity.

Pune: Partly cloudy, but very hot in the sun. Days expected to rise to 39/40c.

New Delhi: Very hot and dry. Surrounding hot dry winds will bring in heat on weekend, with the day touching  44c. Nights warming up to 28/29c.

Nagpur: Sunny day, partly cloudy in the evening. Days will be 46/47c, and nights will be an unbearable 30/31c.

Kolkata: Partly cloudy days, and stuffy at night, as minimum temperature will be around 26/27c. Days will remain in the 36/37c range this weekend. 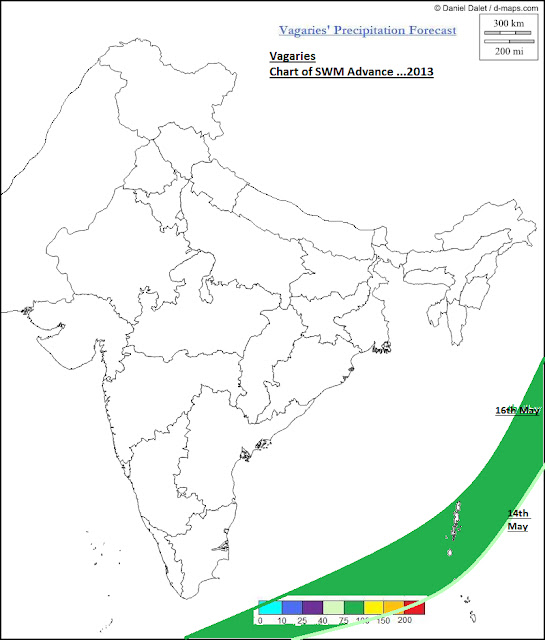 wow this is great news for us in bangalore

Super news for bangalore. I would advice my friends and family to look out for wet weather next 3 days.

dear rajesh sir,
in today deccan herald news paper, they have mentioned that SW monsoon will make presence in S interior karnatka only after Jun 15. they have taken reference of IMD bangalore.

ist true? any chance of delay in monsoon. please give your views

RAJESH SIR, AS I PLANNING TO GO TO LONAVALA NEXT WEEK , R THERE ANY THUNDERSTORMS INSTORED FOR THIS PLACE.

Its very cloudy in jayanagar. But no rain so far.

RAJESH sir what IMD says:-conditions have become favourable for the advance of monsoon over the Andaman seas and neighbourhood areas in the next one or two days.??

Samji best time to visit Lonavala is during monsoons(but remember this place recives around 4000-5000mm of rain!!!) or just after rain full of cascading waterfalls,dense trees...Mumbai - Pune express way is most beautiful highway in India- dense forests+waterfalls, tunnels..

Arun Kumar: Have put up my estimate of arrival dates...sure initially SWM is weak in interiors
Sam: I think pre monsoon showers will start from 28th/29th in Lonavala also..maybe a day delayed...

Prasad Godase: What can I answer to your question. Vagaries has put up the advance of monsoon in Andamans on 16th