India_Australia Cricket Test Match..Overnight rains will see a damp pitch in the morning. Thursday will have cloudy weather and interruption of play possible due to rains.

Posted on Sunday, 10th March:
Heat Waves abate to some extent in the Sub-Continent

After offering the first 40c of this season to the country, the Western coastline of India has finally shown a downward trend in maximum temperatures.
Mumbai along with Rajkot managing the first 40c of the season, have been the hot regions due to the high pressure in the region and the Easterly flow towards a high in the Arabian Sea.

Now, we see a high slowly developing in NW India. initially for the next few days, and then a trough running along the 20N-22N West -East line from Vidharbha thru to the East coast. This will embed a low in the lower regions of the atmosphere around North MP region.

The effects of all this: 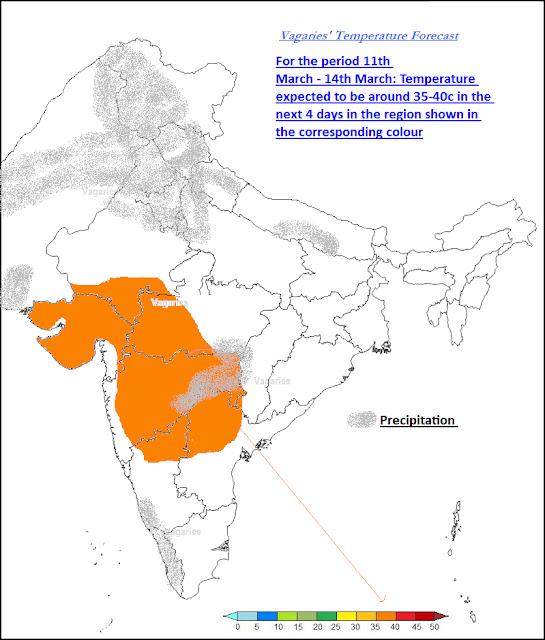 Wednesday 13th March: M-2 moves into the plains of Pakistan, and along with the hilly regions, gets precipitation. again, fairly good rains for Islamabad. Some showers in Southern Sindh can translate to rain in Karachi on Wednesday.
Karachi will hover around 31/32c with rain as forecasted for Wednesday.
Hyderabad (Sindh) will get relief from this M-2 system, as the days will be under control within the 35c levels. Monday will be cloudy.

M-2 brings rains/snow to all of Kashmir and HP. Cloudy with some showers for Punjab and West Haryana.

In India, Kashmir and HP get rain/snow. Light rains for Punjab, N.Rajasthan and Delhi NCR.
Cloudy weather for Vidarbha, with light isolated thundershowers, in East Vid (Nagpur/Chandrapur), and adjoining S. Chattisgarh.(Remember the trough?)

Pune: Partly (light clouding) on Mon and Tues, with the day around 36/37c.
Thursday should be clear and warm at 37c. The lows will be around a comfortable 17c.

Delhi NCR: After a warm Monday and Tuesday at 33/34c,
Duststorm and showers on Tuesday night, and some night rains. Dust raising winds possible.
Wednesday may again see another thundershower/duststorm, with precipitation.

Surat: Monday thru Thursday: Sky will be partly vieled with high cirrus clouds in the day. Temperature range will be between 35-21/22c.

Do not miss the editorial article below in yesterday's Post

Had a talk with GSB today, and he requested to know the latest on ENSO..said neutral now...and possibly neutral till June/july...shall update...

"....The National Oceanic and Atmospheric Administration, a key U.S. weather forecaster, has extended into the summer its view that the El Niño climate phenomenon should present few weather problems in the Northern Hemisphere.
In its monthly report, the Climate Prediction Center (CPC), a part of NOAA’s National Weather Service, said its models for the El Niño weather pattern remained neutral through the summer months, but had a more ambiguous outlook for the second half of the year due to greater variations in its longer-term readings."

As far as the topic of GW is concerned we humans have a tendency to simplify things... the Earth's enviornment is a very complex syatem... human action is just one of the variables that affect this system..

Till recently livestock was considered harmful to the enviornment...take this headline for instance...

Now a biologist/environmentalist Allan Savory has turned this theory on it's head...this is what he says in the video linked below..

“Desertification is a fancy word for land that is turning to desert,” begins Allan Savory in this quietly powerful talk. And it's happening to about two-thirds of the world’s grasslands, accelerating climate change and causing traditional grazing societies to descend into social chaos. Savory has devoted his life to stopping it. He now believes -- and his work so far shows -- that a surprising factor can protect grasslands and even reclaim degraded land that was once desert.

A lot more will have to be written and said before the GW debate is finally resolved.

Hi Rajesh! Whats the forecast for Mohali test match for tomorrow? Will the predicted light rains happened during the day or in the evening? Please reply.

@Rajesh sir I just saw the 925 hpa map which you have recently posted in your blog via link.Winds over NE interior Maharashtra is moving in the variable direction i.e. these winds are not moving from specific direction.Whether it's a trough which is causing the winds to move in a variable direction????..Shitij (Surat)

I see a low forming over West MP by Saturday..shall put up thr review on tomorrow's blog...

Rajeshbhai, reports of rain over Wardha have come....Potey

You were spot on with mohali forecast. You expecting overnight rain tonight also?

svt: Should not be raining tomorrow at Mohali..cool weather