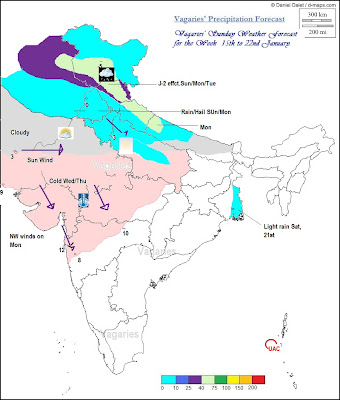 Indicative low temperatures for the week are put up on the map with city location.
Vagaries' Sunday Weather Forecast for the Week 15th to 22nd January.
1.J-2, mentioned in the last weekly report, has started becoming effective in the Northern most regions of the Sub-Continent from Saturday, 14th as predicted.
This system is expected to precipitate snow/rain over North Pakistan, North Indian States of Kashmir and H.P. on Sunday/Monday and Tuesday. Rain showers will occur in upper Sindh in Punjab plains in Pakistan on Sunday/Monday.
Isolated hailstorms will occur in the plains of Northern India, i.e. Punjab,Haryana and Western U.P. on Monday.
Precipitation spreads to Western Nepal on Monday. Kathmandu will be cloudy. Drop in night temperature on Wednesday/Thursday.
2. Cloudy conditions with strong west winds over remaining Sindh (Pakistan) and Rajasthan on Sunday.
3. J-2 will not survive beyond Tuesday.
Cold conditions due to NW winds in Saurashtra and Kutch on Monday 16th.
Tuesday /Wednesday cold wave with drop in night temperature by 3-5c in Northern, Central and Western India. Cold N/NW winds.
Lows expected during the week; Srinagar: -5c, Amritsar: 0c, Delhi: 3c, Mumbai:12c, Pune 8c, Nagpur: 10c.
Central and Southern Pakistan will be cold again from Tuesday, with night temperatures dropping to 0c in interior Sindh and Karachi could go down to 9c on Teusday/Wednesday. Sukkur could drop to 3c.
4. Monday,16th will see light rains in the central U.P. areas.
5.Dry weather throughout the week for Bengal. At the end of the week, on Saturday,21st, a trough will bring light rains to Chattisgarh, W.Bengal.
6. During the week,South will be dry. UAC over the Bay Islands will fizzle out.
A fresh J-3 is slated for 22nd January. But it is out of the preview of this forecast, and will be discussed later as and when.
Mumbai: Sun/Mon/Tues will be clear and with temperatures in the normal range i.e. 31c - 16c for S'Cruz and 32c -18c for Colaba. Tues/Wed/Thu will be windy (NW winds) and see a drop in temperatures, both day and night. Low will slide down to 12c in these nights at S'Cruz and 15c at Colaba.
Pune: Similarly, Pune, after remaimng at 12c in the start of the week, will slide down to 8/9c mid week.
The first edition of the Vagaries' Sunday Weekly Forecast put up last Sunday (8th Jan) was 90% accurate.
Check "Current weather" tab on Vagaries to see the real time temperatures of your city.
By Rajesh at January 14, 2012

Hello Rajesh
Would this cold winter shorten the relentless summer duration and keep the temperature low during 2012 in subcontinent..

shaz:As yet, one cannot predict the duration of summer. Summer starts technically in March (sub continent), but, actually depends when the flow of W.Ds stop. We have W.D.s move into N.India in March and delay summers.
however, if W.Ds stop in Feb summer is on the way !

its much colder than the predicted temp now in thane it seems...