A forecast Map for J-1 . Click here for larger View. 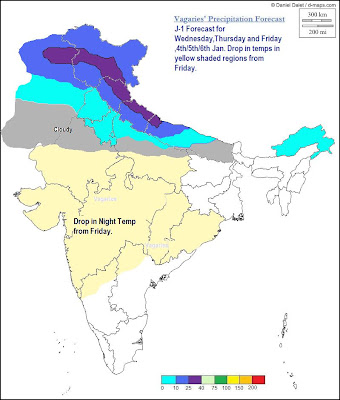 This season's first snowfall in Arunachal Pradesh occurred at the picturesque Tawang town situated 10,200 feet above sea level. The low temperature plummeting to -6c. “After recording the season's heavy snowfall since Sunday, life was thrown out of gear. Sela Pass at a height of nearly 13,700 feet on the Bomdila-Tawang road, was covered with three feet of snow in the last three days.Heavy snowfall blocked the road at Sela Pass yesterday.
On Sunday and Monday, the hills around Darjeeling received the forst snowfall. Tiger Hill had snow. Darjeeling had a high of 6.8c and a low of 1.5c on Tuesday.
Mumbai recorded a minimum of 17c at S'Cruz and 20c at Colaba. This was expected, as mentioned in the last blog article. However,the city will see night temperatures dropping from 7th Jan.
Pune will also feel the cold after 7th Jan.
Mark Vogan gives an outstanding account and details of Gale wind Storms in U.K., with videos...dont miss it, see here.
Astonishing 105 mph were recorded in Edinburgh's Blackford Hill and at Malin Head, Co Donegal while the Forth Road Bridge and Isle of Islay recorded gusts of 97 mph. This storm was BY FAR the worst of the season with large swathes of damage ranging from downed trees, snapped signs, lorries blown over to roofs being blown off....
100mph winds and blizzards batter Scotland
The River Clyde burst its banks in several places as severe weather hits the country on Tuesday...
Lorries blown over in 90mph winds force closure of M8 Kingston Bridge.....
By Rajesh at January 03, 2012

you except the temp in mumbai to go below 10??

sridhar: The minimum temp at S'Cruz could be around 12/13c between 7th to 10th Jan.
Pune could go below 9c.

Do you expect tempartures to fall below 11deg as predicted in newspapers in Mumbai. Wht will be the effect of WD j-2 approaching on 14th jan on Mumbai tempartures