The UAC in the Bay has fizzled out. A dominating "high" in the wake of the NEM withdrawal has brought cold to the Southern regions of India. Southern states of A.P, Karnataka, T.N. and to some extent Kerala, are experiancing a cold wave since Monday. yes, its a regular cold wave, with temperatures down by almost 9c from the normal.
Lowest record temperatures ever...
Medikeri went down to 4.8c,touching its lowest for Jan 4.8c reached in 1990 on 20th Jan. Belgaum saw 7c on Monday, its lowest ever, and Mysore dropped to 7.7c on Monday, its lowest ever for any month ! and Bangalore sees 12c after many years, Davengiri was at 7c today (Tuesday).
Chennai dips to 16.9c on Tuesday, very pleasant for the city. And Dharmapuri fell to 13c. Even Pondicherry saw 17c, 5c below normal! Ooty was at 4c on Tuesday.
Even in Kerala, Kochi (CIAL) dipped to 17c.(Lowest ever is 15.7c for Jan).
Srinagar, 16th Jan 2012: 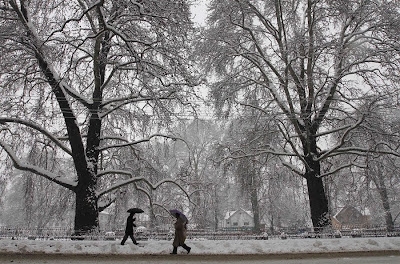 Well, into Tuesday, and lets chase up vagaries' forecast and actual.
"J-2 will not survive beyond Tuesday"- certainly will not, in fact the system has fizzled out in the upper Himalayas.
"Central and Southern Pakistan will be cold again from Tuesday"-cold conditions have started, and Karachi has reached the predicted 9c, and Sukkur is 2c away from the 3c estimated, maybe tomorrow.
Cold will creep into Northern India plains from Tuesday night, in fact, expecting Delhi's 3c tonite itself! Delhi, after a foggy day, saw the high managing only 14c on Tuesday. Thick fog expected Wed morning.
Further fall in night temperatures tomorrow in Haryana, Punjab and North Rajasthan.
Other city night temperatures estimated in the weekly forecast should not become difficult to reach.
yesterday's Snowfall in Vaishno Devi..see video here.
Western Nepal had mild rain from J-2, and as expected, will not get any major benefit. (Neeraj was hoping for better precipitation). For Kathmandu, Fall in night temperatures estimated from Wednesday.
Mumbai was 15c at S'Cruz and 18c at Colaba on Tuesday. Expect partly cloudy conditions, and a fall to 13c next 2 days.
Pune has already slid down to the predicted 8c and Nagpur to 10c on Tuesday !
Kolkata nights have started rising as anticipitated, and reached 13c on Tuesday morning. Should be around 14/15c next few days, and cloudy from Friday.
J-3 is expected over Pakistan on Saturday,21st Jan. And will be covering the regions of upper Sindh, Punjab and Northern Pakistan with precipitation. Though not very strong ! Into Indian regions from Sunday,22nd.
By rajesh at January 17, 2012

thanks for the kolkata update

how are we through this weekend?

Shitij: Could you give me details of the fog ? at what time and how thick was it ? was it overnite ?
Ghosh: Please keep me posted on the actual weather if possible, will help in guaging the estimate accuracy.
Satyen: week end will be of course dry, but slightly cold.

I am not sure whether fog started forming during the overnite hours or not but when I wake up at 6 am I saw a thick fog.It was difficult for me to see nearby buildings.Visibility has been reduced to 150-200 meters.Fog lasted till 8 am. 3years ago when I was in the school that time I have seen such type of thick fog.Such type of fog occured rarely in Surat.

PWP: Nature at its best in the North !