After having vanished from the weather charts yestedray, As-2 has re-appeared again, and in fact moved nearer to the coastline, and is in the NE Arabian Sea, South -West of Veraval.
Associated massive clouding, due to fast deepening, has formed in the SW and SE quadrant, most of it in the sea yet.
Some parts of Konkan received showers today morning.

Meanwhile, we have another "guest" visiting North India ! In additon to the parameters contributing to the rain mentioned yesterday, S1 and the easterlies, BB-5 has joined the party by moving North, and is over North M.P. and adjoining U.P.
Rainfall, though light, has commenced in the North today. Delhi has received 17 mms.

Rajesh it's steady rains / showers for Juhu at this point, however it's become very windy since the last 3 hours or so. Also looking at the Cloud Top Temperature image there is a very heavy CB cloud cover over better part of Konkan and Madhya Maharashtra currently, Cloud Top Temperatures around -50 Degrees currently over Mumbai, so heavy to very heavy rain very much a possibility as your 'Flash Snippet' says. What is the forecast for tomorrow? Is AS 2 moving away to the West?

pune was lashed by heavy showers from 8am till now

I was driving from Sangli to Mumbai today. Started @ Sangli by 7.30 am. Rains all along. Heavy after 8.00 am. What a drive it was. Khandala was all in clouds! Pune, Satara was very heavy.

Looks like Maharashtra will never have respite from rains!!!! September rains are suppose to come south india (where it has been very less). Always we see monsoon axis over central india, Maharastra,Guj,Raj - never does it passes through south india - why so?

Pavan: Forecast gone haywire !
sset: The monsoon axis is normally over this region during the monsoon. Shifts north to himalayan foothills, or a bit south upto North Mah.
When SWM withdraws, the axis will shift southwards to S.India.

Posted 5th December 1 pm: The Cyclone "Burevi" , now as  depression in the Gulf of Mannar, will further weaken to a "Well Ma... 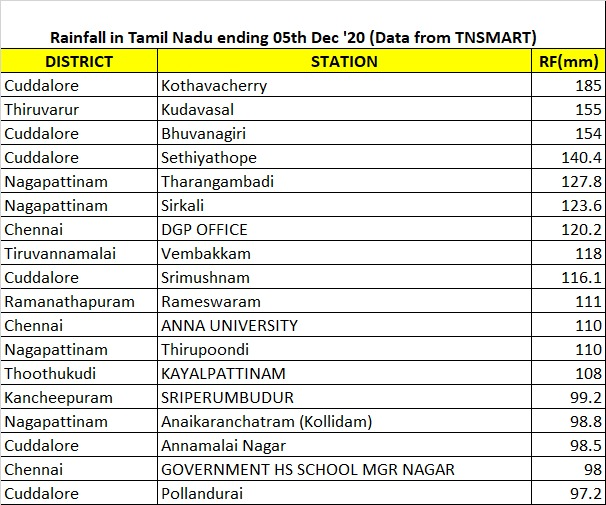