The Vagaries of the Weather in March (2022)  has prompted us to make and early Monsoon Watch, as the first initial para meters may now be affected!

We jump the date early for South West Monsoon Watch Series as the March Weather was a bit extreme..Early readings for Monsoon Forecast: 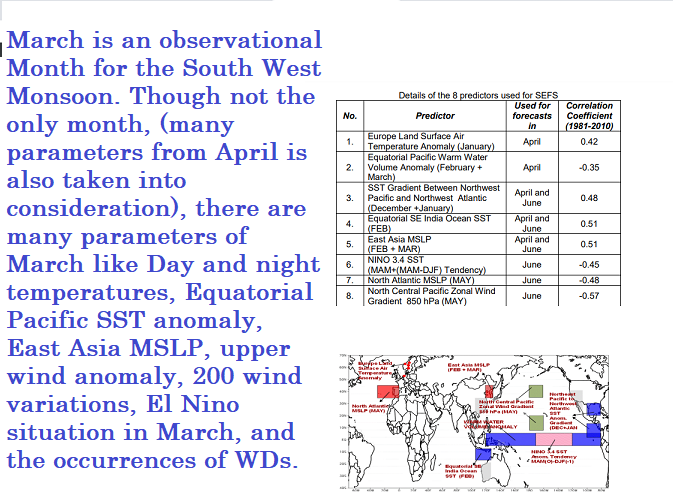 *Currently, La Niña conditions are prevailing over the equatorial Pacific region. The latest forecast indicates that La Niña conditions are likely to continue throughout the Month.
*The Madden Julian Oscillation (MJO) Index currently lies in Phase 6 with amplitude close to 1 and will move across phases 6 & 7...Not favourable for convective activity next 15 days at least.

*Early MJO observations are done from March to gather the prediction for the next 60 days .(The MJO is the leading mode of tropical intra-seasonal climate variability and is characterized by organization on a global spatial scale with a period typically ranging from 30-60 days.)

*We have seen in previous Monsoon Watches, that we scan for Pre Monsoon System in April.

2 pre monsoon low pressure system in Bay over Bay of Bengal and both intensified into Deep Depression, but none of them made any landfall over India.

March 2022 is unique month in last 132 years when for the 1st time in the month of the March, 2 systems of intensity of depression and above formed over north India Ocean.

The Depression in Monsoon and Pre Monsoon systems are different..

*Pre Monsoons systems are deeper, and can strengthen to cyclone. The cyclonic storm is a warm core phenomenon where the temperatures at the centre are warmer than the surrounding (areas) regions. T The All India Departure was -71% for March. 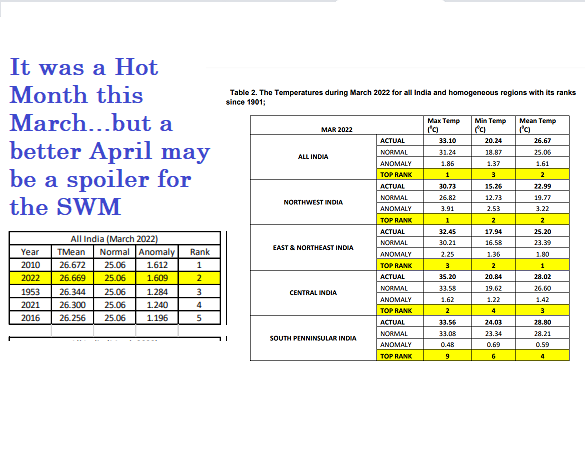 It was a Hot Month this March...and may auger well for early onset..but a different ( cooler) April may be a spoiler for the SWM.
All Data for this Article from IMD

Early Curtain raiser to swm 2022 welcome in a different format and as extreme March month made vagaries to respond and vagaries always on its toes reacted quickly to come out with MW 1.

Like the new format.Glad to see that the annual Monsoon watch series has started early..Eagerly awaiting your next update. Thanks again