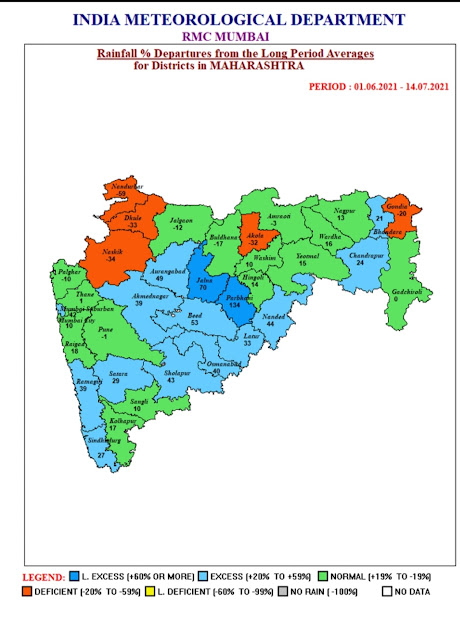 Major parts of State in Excess or Normal category.

*Note: Although most of Maharashtra looks normal or excess, it does not reflect the water stock in the reservoirs. Most of the catchment areas (lakes/dams, river sources) being in the vicinity of western Ghats, due to less rain in the Ghat region, the water storage is low for western Maharashtra. Also, Vidarbha region average storage is 35% as of now.*

Outlook for next 5/6 days for all regions of Maharashtra ...till 22nd July:

Konkan: Good rainfall, with few heavy falls in all districts, will continue till 20th.... after 20th heavier rainfall and increase in intensity seen, with very heavy falls (after 20th) in Konkan.

The off shore trough will persist and remain active..extending rainfall into South Gujarat as well.

Mumbai: The current spell of  the wavering rainfall (On suddenly heavy thunder showers/and sudden sunshine) will continue till 20th. Though some of the showers will be heavy. 35-60 mms/day average.

This time, active offshore trough along west coast will lead to strengthening of westerly winds. So catchment areas in interior konkan as well as Western Ghats belt likely to receive heavy rain.

Vidharbha: Not much rainfall on weekend (17th/18th). But increasing after Monday 19th to moderately good intensity. Increase for 2 days.

Overall, increase from 20th..and the Excess & Normal will be maintained. Few deficient districts may remain in Northern Madhya Maharashtra.